Which Bowl-Bound Defensive Prospects Should the Chiefs be Interested in? 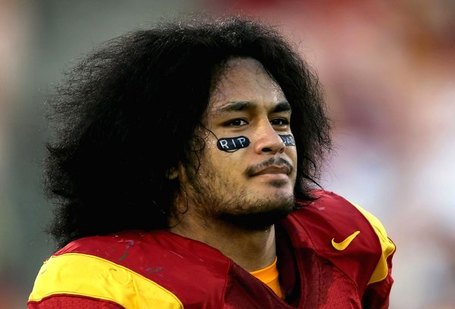 With the news that the Kansas City Chiefs will be picking third in the first round of the 2009 NFL draft and the college bowl games coming up, we wanted to throw out some defensive players to watch in bowl games this weekend.

I'm taking players from Mike Mayock's twenty top prospects list over at NFL.com. Not all of these players will necessarily be looked at hard by the Chiefs but it's good to be informed anyway, right? Don't worry about jumping into the later rounds just yet. We'll have plenty of time for that.

Notes from NFL Draft Dog: Top rated DE; good against the run and the pass; rarely out of position; will have trouble "turning the corner" at the next level.

Living in Austin, I'm constantly coming across Orakpo's face on the local news. He's the main defensive player that gets interviewed before and after the game. He's also one of the de facto spokesman for the team, being a senior.

Check out this 1 min. clip of his highlights against Missouri, a game I actually attended.

Orakpo is a monster in the weight room and this clip from ESPN is worth it just to see what Orakpo looked like when he came to Texas and what he looks like now.

Expect him to get a touch of the "workout warrior" label because of his scary ability in the weight room. That doesn't mean it will stick though.

Watch these highlights of Maualuga against Illinois in the Rose Bowl last year and be very impressed.

Arguably, a linebacker with Maualuga's pass rushing ability is what the Chiefs' need most. He's a guy, especially in our defensive state, that you would tweak the scheme to cater to his abilities.

Notes from NFL Draft Dog: With Maualuga, head and shoulders above any other linebackers in this class; not as stout against the run as Maualuga; highly decorated; pass coverage is a strength.

Check out some of his highlights below. FYI, music plays pretty loudly on this video.

Laurinaitis almost came out of school last year but opted to come back for a senior season. This is Lanier63's boy so watch what you say about him.

Click that link to the NFL Draft Dog site and the first thing you'll notice about that picture of Michael Johnson is that he is so much smaller than Brian Orakpo. He's like a Brodie Croyle at the defensive end position. He is very tall and athletic though, not to knock him too much.

Check out these highlights from the Georgia Tech v. Virginia Tech game from September of this year.

So, there are four guys for you to keep an eye on this week. This is your last chance to see some of these prospects in live action, which is something I have to admit I don't get to see enough with a lot of these prospects.

We're going to beat this first round draft pick selection to a pulp over the next few months. But shooting from the hip, who do you like out of these guys? Right now, I'm a Maualuga fan myself. That highlight video sold me.

We'll be talking about the offensive players to watch tomorrow. Add any other bowl bound defensive prospects you'll be checking out this week in the comment section.