Share All sharing options for: Tony Gonzalez On His Future, Larry Johnson 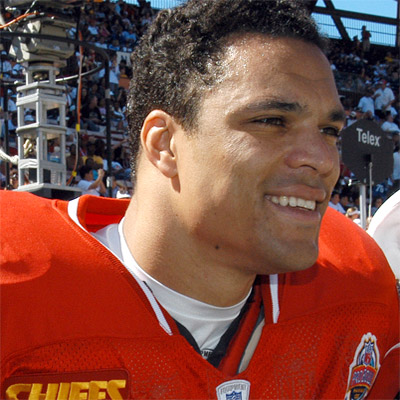 Tony Gonzalez addressed the media yesterday in a candid session that demonstrates his faith in Herm and especially this offense.

He wants Herm, Chan (and his position coach) to remain because they are "good coaches" but it's "just a waiting game at this point.

On the coaching staff:

I think these guys are good coaches and will take us in the direction we need to go.  It's just a waiting game at this point.

His future is in Clark's hands:

Whatever Clark wants to do, hopefully its in the best interest of the team. I'm sure it would be, obviously.  We'll make this thing work.

He seems willing to stay:

I'm ready to see it through.

Larry, the relationship has run it's course and if he doesn't want to be here then the Chiefs don't want him then I say grant him his wish. If it works out, it doesn't.  And that's Larry's deal.

As far as I'm concerned, as a veteran on this team going into my 13th year, the last thing I want to hear is the word rebuild.  I'm just not into it. If they want to blow it up, I'll be frustrated.  I'll be pissed off.  But, in reality, it's just like this year.  If they don't want to let me go they don't have to.  And I'll still have to come back and play hard.

Whatever team I'm on, hopefully it's this team, we can build something special.