Share All sharing options for: Chiefs: Worst to First? 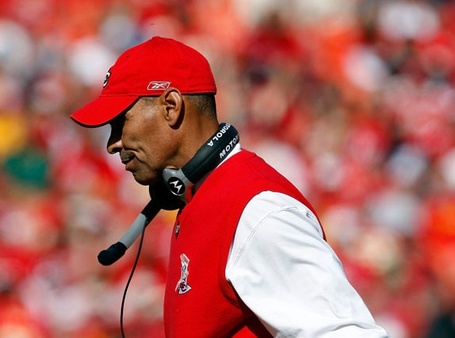 You hear about parity a lot in the NFL. The way the league is designed, teams at the lower end do have a genuine shot over a couple of years to get good players and rebuild their team.

You think about teams like the '08 Miami Dolphins, who last year nearly became the first NFL team to go 0-16.

You remember those things and wonder if the Chiefs, currently 2-10, have that same potential to surpass or even double their win count in 2009.

Tony Moss from the Sports Network chimes in on this topic:

Kansas City, which snapped a seven-game losing streak with a 20-13 win at Oakland this past Sunday, is 2-10 and might not win again in 2008. The defense has been historically horrific in a number of categories (an aside: which of the Chiefs' six sacks on the year has been your favorite?), and four different quarterbacks have thrown passes for a team nearly certain to come away with another top-five pick in next April's Draft.

Still, there are several promising developments that could lead an observer to make a case for Kansas City's possible quick ascendancy to competitive status.

Moss then goes on to list his reasons why the Kansas City Chiefs could compete for a playoff spot in 2009.

Tyler Thigpen- Of course, the hard core Chiefs fans know that Thigpen's assured role as the 2009 starter is far from concrete. Moss points out Thigpen's consistency, especially at, you know, retaining the physical ability to play football, as a big reason for success.

High draft pick- If you're a Chiefs fan, you better be skeptical about the current leadership's ability to draft well over the long term. The numbers simply aren't there. Even if the Chiefs get a high draft pick, no matter what the position, there is a real possibility of picking a bust.

Maturing roster- This one's pretty easy to handle. Guys are naturally going to get smarter and better as they continue in this league. Our 18 rookies currently on the roster, even though lots won't be on the team next year, will be markedly improved with this season under their belt.

The terrible AFC West- Sure, the Chiefs could make a run next year if the competition in our division remains as weak as it currently is. But what good is that if your team gets destroyed by a much more capable, "real" playoff team in the first round? This rebuilding isn't about playoffs. This is about actually competing at a high level on a long term basis. It's nice to have low level competition but it's also not an automatic Super Bowl win either.

Coaching staff continuity- Herm and his crew are around until at least 2010 so get used to it. Because of the Chiefs record, all of the cable sports shows and traditional media top 10 lists of coaches on the hot seat will include Herm Edwards. Don't believe them. Clark Hunt is not about to pull the rug out from underneath this organization. Herm is safe for a while.

I do think that continuity in the coaching staff and the scheme especially are big factors in a team's success. At the same time, there seems to be anecdotal evidence that a coaching regime change can do some quick good for a team.

Obviously, even going by the title of this post, I don't think the Chiefs are anywhere near a first place team talent wise. The AFC West's dissolution of competition would help a first place team but it would be 2006 all over again; a break in the clouds that we took for lasting sunshine.

Lots of people emphasize playoffs as the ultimate goal when we know better. We fell for the "nearly there" playoff trap for too many years. I don't care about the playoffs if our team is not prepared to compete once they get there.