Did the Chiefs Contact Scott Pioli About GM Opening? 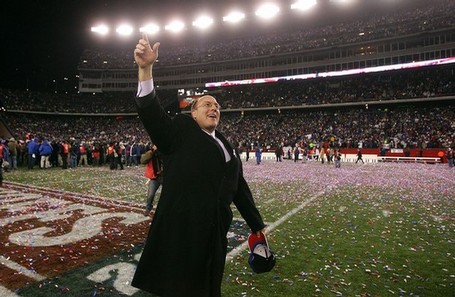 The Browns have been granted permission by the Patriots to interview Pioli and could talk to him as soon as Tuesday. Pioli has also been contacted by either the Kansas City Chiefs or Detroit Lions and will interview for that job as well, a source said.

Either the Chiefs or Lions.  Common sense would say it was the Chiefs considering the Lions recently announced that they were elevating Martin Mayhew to the status of GM.

The unfortunate part of all this is that the article linked above from the Cleveland Plain Dealer focuses on information from sources that Pioli is "very interested" in the Browns' GM gig.

Well, it means that competition isn't always a good thing.  3 years ago Pioli was offered a 5-year, $15 million deal by the Seahawks despite never formally interviewing for the job.  He even turned down what was an intriguing offer from the Giants in 2007.  Essentially, Pioli's the man and will command a lot of power (and money).  His apparent interest in the Cleveland job doesn't bode well for the Chiefs.

Pioli's ties to Cleveland include working under then head coach of the Browns Bill Belichick in 1992 and his wife being from the Cleveland area.

However, I'm going to hold off on becoming a Gloomy Gus on this topic until he interviews with the "other team" that contacted him.

That's an ideal situation for a first time GM like Pioli.  The big position, QB, isn't a priority.  The Browns are talented and, judging by 10 wins in 2007, are probably not many players away from being legitimate contenders in the AFC.