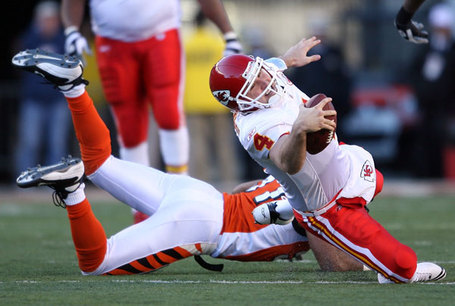 In a microcosm of the Chiefs season, Thigpen was just short.

The Chiefs 2008 season will be remembered as one for the record books.  The worst record in franchise history and an NFL record for the Chiefs' futility in sacks.  In an attempt to gather some silver lining from the 2008 season, let's take a look at how the Chiefs fared pre- and post-Thigpen which for our purposes means the 1st 6 games and the last 10.

How often is it that your offense actually improves by 2 scores from one half of the season to the other?

The points are there, where's the W?

The first 6 games of the season, or pre-Thigpen if you will, showed just how awful the Chiefs could be.  We lost 4 of those first 6 games by more than 7 points.

The final 10 games we lost by more than 1 touchdown just 3 times.  Improvement?  Slowly but surely.

Playing up and down to the competition

The first 6 games of the season we bowed out early when facing a good team (.500 or better).  The Patriots, Falcons, Panthers and Titans all steam-rolled the Chiefs in the first 6 games by an average of 22 points.

The final 10 games saw the Chiefs pitted against 7 teams with records of .500 or better.  The average margin of defeat there was a shade under 5 points.  So, judging by the margin of defeat, the Chiefs did improve in the 2nd half and played up against competitive teams.

The Chiefs' season was a tale of two halves (have you heard that before?).  But in the end, nothing that matters changed.  We won 1 game in the first 6 and 1 game in the last 10.  Though we played better statistically on offense, the W's just weren't there.