Share All sharing options for: Chiefs End the 2008 Season in Typical Fashion 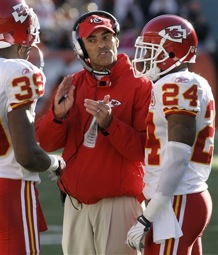 It's really hard for me to say the Kansas City Chiefs are improving when you finish the season with a game like yesterday's.

Are we being duped? The Chiefs look like a house of cards, ready to fall at any moment.

Close to the worst game of the season

I'm going to stop short of calling yesterday's "game" the worst contest of the season. That distinction goes to the Week 5 game against the Carolina Panthers.

But the Chiefs did make it close to the worst game of the year. Here's how this game stacks up against others this year.

Not the worst but close. How do you possibly end this season on such a low note against such a terrible team? Did the Chiefs give up?

Worst rushing game of the season

If Larry Johnson wasn't such a complaining, pouty, excuse making off the field problem, he'd have a right to be pissed off about the number of carries he got this year.

The Chiefs managed 31 yards on the ground yesterday, which is a hair under the second worst rushing performance. 15 rushing attempts is the second lowest number of attempts of the season. The Chiefs aren't interested in giving the ball to Larry Johnson anymore. Hopefully this means he gets kicked to the curb.

2.1 yards a rush is embarrassing. Especially against the Bengals. We're broken in the running game and nobody currently on our coaching staff can help.

The Chiefs' running defense is so bad that I think we need to introduce a gambling scandal of some sort to justify their poor performances. Wouldn't that make you feel better if the Chiefs came out and said they were throwing the games for money?

No team should play this poorly over such a long period of time. When is the Chiefs' front office going to hold Gunther Cunningham accountable for this NFL travesty of a defense? Expect the heat to fire up on Cunningham over the next couple of weeks. I'd love to hear a defense of his defense.

What else is there to say?

This Monday morning post is not unlike a lot of the posts I did this season. The Chiefs were outcoached, outplayed and outsmarted. Again.

I'm cutting this one short because, well, it's the off season and we'll be hammering home a lot of my points over the next few months.

For those of you that haven't been around for an AP off season, we still post everyday and we'll actually get bigger as a community during the off season. So come back early and often for your Chiefs fix. You can still get it here.