Morning Update (What They're Saying Edition)

Share All sharing options for: Morning Update (What They're Saying Edition) 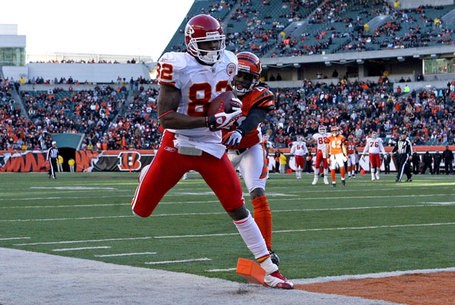 He was out of bounds but that didn't stop Herm from challenging.

Adam Teicher speculates on Herm Edwards' future with the organization:

There’s also a business aspect to the decision. The firing of Edwards could energize a fan base that is rapidly becoming apathetic. Season tickets, once stopped at about 70,000, topped out at about 60,000 this year.

The Kansas City Star says we better get a move on if we want Pioli:

If they are interested in New England vice president Scott Pioli, they might need to move quickly after the Patriots failed to make the playoffs. That’s because the Cleveland Browns might have an interest in hiring Pioli.

Bob Gretz has audio of his interview with Larry 'I want out' Johnson.

Joe Posnanski says the Chiefs' season can be summed up in about 4 plays:

So how did it happen?  Well start with the trade of Jared Allen to Minnesota.  That took 17 sacks away from the Chiefs defense and they were unable to replace them.  They didn’t even get close.  In 16 games, they were shutout from taking down the passer 10 times.  In three other games, they were able to get one sack.  The best sack game they had was three against San Diego two weeks ago.

Tyler Thigpen states his case to be the starter in 2009:

"Look at the way I’ve played," said Thigpen, in his second year with the team. "Look at the way the offense has moved. Look at the way, you know, guys are so much more energetic when they’re out there with me. It’s like those guys got a second wind in the second half of the season, when I became the starter."

Kent Babb is blaming the defense (and rightfully so):

Players such as Babin and linebacker Rocky Boiman were acquired because of numerous injuries that plagued the Chiefs. Kansas City has blamed those injuries for its horrific defense, but the fact was that the Chiefs started eight of the same players Sunday against the Bengals as they did in their opener at New England.

Tony Gonzalez on playing down (or up) to the competition:

"I feel like we always play to the level of our competition, and that’s no disrespect to the Bengals," Gonzalez said. "We’ve gone out there against teams that are going to the playoffs and we’ve played them really well and we’ve put up points. For some reason we couldn’t put up points against a defense that didn’t have a lot of their starters out there.

"It doesn’t make sense to me."