Larry Johnson Doesn't Want to be a Chief

Share All sharing options for: Larry Johnson Doesn't Want to be a Chief 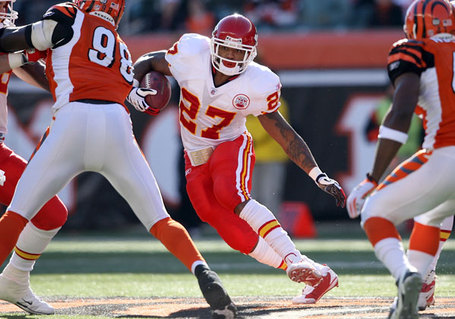 The feeling is mutual Larry.

"Hopefully, my future is not with this organization. It’s not (the Chiefs’) fault. Half of it is mine. Half of it is my off-the-field situation and other things that occurred.

Larry Johnson isn't even looking to next year to see what happens with a new GM.

LJ always was a little pouty about his playing time. On how he fits into the spread offense:

I don't. I have never been a six- or seven-carry per game back and expect 200-yard rushing games. It's never been my style. I wish it could be. It's not me. I wear down defenses and get yards when the offense really pounds the rushing plays.

We really need to ship Larry Johnson out of Kansas City, at whatever price we need to pay. Cap hit. Low draft pick. He needs to leave.