Share All sharing options for: Chiefs Avoid Many All-Time Worsts 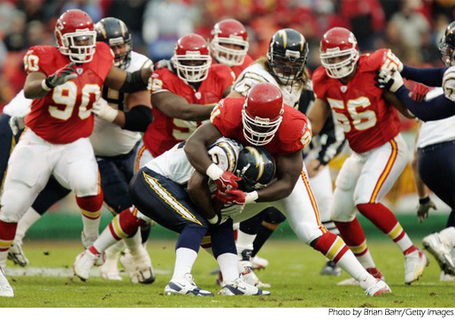 We're back and ready to get back to our normal posting routines.  Thanks for being patient over the holidays and we hope you had a great Christmas!  -Chris and Primetime

If you'll remember, Chris had a post around Thanksgiving detailing the records (both franchise and NFL) the Chiefs were on pace to break.  I went back and took a look at that and, surprisingly enough, things are looking much better now than they were in Thanksgiving.

We appeared to be hovering around several records - not the good kind though, but records for the Chiefs futility.

I'm not sure if this is a compliment or what but the Chiefs, at this point compared to week 10, appear to be less bad.  Are we headed in the right direction?  Are things improving?  I don't know.  But I do know the 2008 version of the Chiefs won't break all the franchise records for their futility.  Check it out below.

Fewest number of points in a season

The Tyler Thigpen era pushed this one out of reach.  While the 1st version of the 2008 Chiefs appeared a lock to challenge this record, the 2nd version has been able to regularly put up 20+ points in a game.

Most consecutive road games lost in a season

If it weren't for Oakland, we'd be staring this record down right now.

Fewest rushing attempts in a season

The Chiefs are 29th in the NFL in rushing attempts this season.  Interestingly enough, the Colts, Lions and Cardinals round out the bottom of the barrel in this category.  It's surprising that 2 of the 4 bottom teams in rushing attempts will be in the playoffs.  I guess running the ball isn't the key to victory.

Most rushing touchdowns given up in a season (NFL record)

The Chiefs are 2nd to last in the NFL in rushing touchdowns given up.  The Lions hold the lead with 30.

Most yards allowed in a season (NFL record)

Following the trend, the Lions are right behind the Chiefs giving up an average of 399.1 yards per game compared to the Chiefs 397.5.

Unless you all can see something I can't, the Chiefs will smash this record on Sunday.

Most rushing yards in a season (NFL record)

Not even close.  Six weeks ago, I really thought we would make a run at this record.  However, our defense did improve (or get less bad) in this category.