Getting to Know a GM: Shack Harris

Share All sharing options for: Getting to Know a GM: Shack Harris 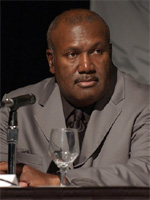 James "Shack" Harris is the former VP of player personnel for the Jacksonville Jaguars. Just today, the team announced that Harris would not be returning to the organization.

"When he and Jack Del Rio joined us six years ago we were coming off three straight losing seasons, and Shack helped build a strong roster that returned us to the playoffs. Though this season has not been what we all hoped for, there have been many great moments over the last six years."

Shack's squads went on to win 5, 9, 12, 8 and 11 games in his first 5 years. His teams improved to playoff contenders under his watch. The 8-win season needs a little context added to it - the Jags switched quarterbacks midseason which is partly responsible for the .500 record.

He is a former quarterback himself having played for Buffalo, Los Angeles and Denver in his 13 year career.

His drafts have been met with some success. He nailed such picks as CB Rashean Mathis (1st), FB Greg Jones (3rd), CB Gerald Sensabaugh (5th) and Maurice Jones-Drew (2nd).

However, he's also had his fair share of flameouts at positions the Chiefs' know all too well - QB and WR. 2003 7th overall selection Byron Leftwich flamed out in 2006 after 3 1/2 disappointing seasons. 1st round picks WRs Reggie Williams and Matt Jones still haven't put up the numbers one would hope a 1st round pick would.

I do have to admit that I'm a fan of the Jaguars (um, more so the 2007 Jags, not the '08 version) and the way they're built. Shack started on the team at the core. Defense first. Then he moved to the offensive line to create one of the better rushing attacks in the league.

A tough defense and a solid running game handicapped by a struggling QB? sounds like a Herm team to me. Using the Jags as a team Harris built, it would appear Herm is the type of coach he would want. They both believe in the same philosophies.

When looking at these GMs, I also ponder what they would do with Herm. Though this is pure speculation, Harris' team in Jacksonville mirrors the type of squad Herm wants which would indicate to me that Herm has a good shot at staying on board if Harris were the man in charge.

Though he was just released by the Jags, that's no reason to discount him in Kansas City. As Chiefs' fans realized, a GM can be played out in a certain city. Their best years are usually the first 5-7. Harris (in his 5th year) built a team last year that was very competitive and considered a Super Bowl contender by many. However, the team flamed out in the playoffs and had the misfortune of peaking during the same season as the greatest team ever ('07 Pats).