Chiefs' Loss Not Entirely on the Defense This Time

Share All sharing options for: Chiefs' Loss Not Entirely on the Defense This Time 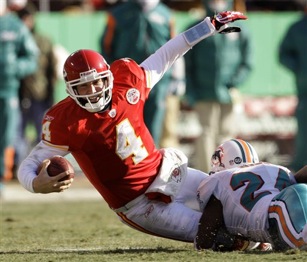 The best part about yesterday's game? Probably that the Kansas City Chiefs had 492 yards of offense, their largest output in over two years. In the second coldest game at Arrowhead Stadium ever no less. The worst part about yesterday? The four turnovers, the three points in the second half...Pretty much the same complaints we've been having for most of the season. Except this time it was the offense who had a chance to tie the game and they could not get the job done.

If you check the box score, you'll see that the Chiefs rushed for 180 yards on 21 rushes. Ah, not too shabby you think to yourself.

Well, Larry Johnson did have 108 yards rushing on 12 attempts. 58 of those yards came on two plays. Larry scored a touchdown and at times was very effective but the Chiefs never did commit enough to the run to have it make the difference. Larry did add six of the twelve first downs the Chiefs generated on the ground.

Tyler Thigpen tacked on 57 of those 180 rushing yards, including a second quarter 27 yard run that set up another run into the end zone for himself. Thigpen's scrambling ability really separates him from a lot of quarterbacks in this league. Add in a couple of fumbles at the snap that Thigpen turned into positive rushes and you've got a legit running threat lining up at QB.

If you go by yards, this was by far Tyler Thigpen's best game of his career. 320 yards passing, 57 yards rushing and two touchdowns in the air and on the ground looks damn good.

He was under 50% in his completion percentage. He threw three interceptions. He only completed two of his ten passes in the fourth quarter.

Thigpen was given a story line yesterday to produce a signature win but he did not do it.

The Chiefs got outplayed by a consistent, accurate veteran passer. No two ways about it.

Is that Devard Darling?

You bet it was. 3 catches for 69 yards and a TD means Darling is...waiting around to be knocked off by any #3/4 receiver that comes along.

Was it just me or was Pollard everywhere yesterday on defense? 8 tackles said he was.

The Chiefs' last three games have all been against teams that were fighting for their playoff lives. Denver, San Diego and Miami were all on the cusp of making the playoffs when they came across the Chiefs. That has to count for something right? A team with a playoff spot on the line outplays a team who has only won two games all season? I think that factors in a big way. Teams are playing with more heart and more urgency than we are.

The Chiefs were down ten points 3:08 into the game. They quickly scored two TDs, one on a short drive and the other on a 17 play, 80 yard drive that closed out the first quarter.

Three points in the second half. Thigpen passed for under 100 yards in the third and fourth quarters. After scoring a field goal in the third quarter, the Chiefs threw and INT, punted, turned the ball over on downs and ended the game with another INT.

Not the defense this time

The game was tied at 31 when the Dolphins took over with 12:41 left in the game. 13 plays and 8:33 later, the Dolphins had their go ahead touchdown.

The Chiefs went four and out on their next two drives, ending the first drive with a sack and the second one with an INT.

The offense had two chances to drive on the Dolphins and they did not do anything. With the game on the line entering the fourth quarter, the Chiefs generated 18 yards on 13 plays.

Also, in defense of the defense, the Chiefs did turn the ball over four times. As always, it's tough to win with four turnovers, no matter who you are.

And then there was one. Football game that is.

I'm starting to feel down that the 2008 Chiefs' season is almost over. In a way, I'm glad the pain will stop. This season has been tough to sit through. But it's still football and there is no replacement for that, taped, highlighted or otherwise.