Chiefs' Thigpen Has The Intangibles

Share All sharing options for: Chiefs' Thigpen Has The Intangibles 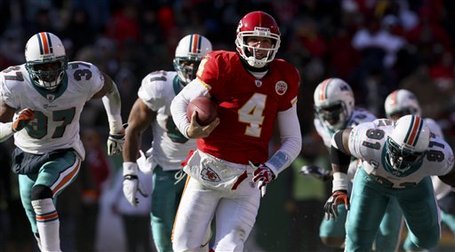 After every session with the media, I like Tyler Thigpen more and more.  He's just 26 years old but says all the right things like a savvy veteran would.  He doesn't throw his teammates under the bus and continually takes accountability for the only statistic that matters - wins and losses

He's not impressed with his statistics, even if one was a career high:

The weather isn't an excuse:

"It’s football. It’s what you signed up to play for. Whether it’s college or the NFL you have to deal with it. This is football weather playing in December."

"No, never going to use any excuses. I thought I did a good job of keeping my hand warm between plays. A couple of snaps dropped where I didn’t focus but we were lucky to get them back."

His demeanor with the media is refreshing.  He's direct and accountable to the team, not the player.

Now is usually the time reality sets in.  Thigpen's numbers aren't spectacular.  In fact, he's in the bottom third of the league in just about all categories to which he can be fairly compared to other players despite playing in half the games.

He's got the intangibles which is certainly important.  But it's only important when you're putting up the numbers to go with that.