Drawing Positives from the Chiefs' Loss to the Dolphins

Share All sharing options for: Drawing Positives from the Chiefs' Loss to the Dolphins 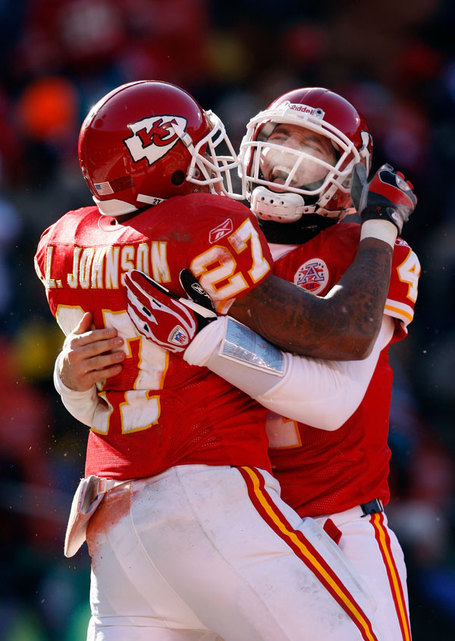 Where did Joey Porter go?

Joey Porter has amassed a drum of criticism through the tenure of his career because of his mouth. He's definitely a talker to say the last. Things weren't so bad last year when the Dolphins won just 1 game but now that his team is in the playoff hunt and he's having an outstanding seasons, his words just pierce my ears.

Take a look at his stats coming into this game:

If it weren't for DeMarcus Ware, Porter would be a threat for the league's sack title. Now, how did he do against the Chiefs' Damion McIntosh.

"I had him one-on-one. We don’t use chips in our blocking assignments. We were able to block him straight up. We don’t double-team on anybody, really. I had him one-one-one. I know how he is. It’s not the first time I’ve faced him. Granted, he’s done very well this year, but we’re not going to go and do something special. We’ve faced a lot of good guys this whole year. I think we’ve been holding up our end of the bargain as far as them not getting to Tyler (Thigpen). Tyler’s done very well. He won’t hold on to the ball too long. He’ll either run it or get rid of the ball, which is big."

"Well, he wasn’t silent. He probably didn’t make as many plays as he wanted to, but he’s a good football player and we’ve got some good football players too. I think that T Branden Albert is starting to show that he is definitely a solid left tackle and has the ability to be a dominate left tackle in this league. But you can never make Joey be quiet, that’s just not going to happen."

McIntosh, a former teammate of Porter, on the trash talking:

"Haven’t heard him. He was silent as a mouse, which is cool."

Honestly, that right there just about replaced my frustration after the loss. Porter talks a big game and McIntosh actually responded by shutting him down.

Thigpen's performance kept us in the game and eventually lost us the game. It's a difficult performance to wrap your head around. However, he did surpass 300 yards passing which, for Chiefs quarterbacks, is a rarity.

You know things are getting bad when this is one of the positives to come out of the game.

Another record for Tony

Heading into the contest with the Dolphins, he needed 59 yards to hit 1,000. He ended the game with 7 receptions for 64 yards and 1 touchdown.

In a season where the news has been dominated by frustration and change, Gonzalez is a necessary constant. The "old man" will put up numbers this year comparable to some of the best throughout his career Hall of Fame career.

Just about every Chiefs fan I talk to says the same thing: Get the ball to Charles in the open field. He has lights out speed and has shown bursts of that speed throughout the season.

He hit the 100 yard mark today - through the air not the ground. That includes a 75 yard scamper where he was actually caught from behind "for the first time" Charles said.

"I was just trying to make something happen and to go down there and get a score, but I got caught from the back. We ended up getting a touchdown anyways though. I just tried to go out there and fight because I wanted to win so bad today."