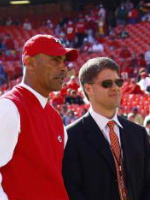 "I've gotta be honest with you, Herm.  I haven't been paying attention to you for the last 20 minutes."

Herm's coaching tactics may not be your cup of tea, but you gotta respect the guy for not quitting.  Per Chris Mortensen of ESPN:

Herm Edwards won't quit as coach of the Kansas City Chiefs, but sources say that with only one year left on his contract, he may not have the energy to embrace a run with a new general manager after Carl Peterson resigned Monday.

Clark Hunt indicated that he wanted a "fresh set of eyes" and someone outside the organization which quickly eliminated a perceived candidate in-house, Bill Kuharich.  Apparently, Herm Edwards was miffed that Kuharich wouldn't be given the opportunity for the job.

Though Mortensen's report essentially says that Herm won't quit, it also says that "several gut-wrenching losses have taken its toll on him."

Herm's no dummy, though.  He sees the writing on the wall.  He knows he better secure a future in Kansas City because nothing is concrete right now without a GM.

Edwards does not intend to resign but will wait on a resolution that brings more clarity to his future, the sources said. That could include a mutual decision in which Hunt honors the final year of his contract.

"Clarity" essentially means he doesn't want to be heading into a lame duck year in his contract.  One way or the other, Clark's gotta make a decision.  You can't leave a coaching hanging in the last year of his deal.  Either extend him or see him out the door.