Terry Bradway Represents More Of The Same For The Chiefs

Share All sharing options for: Terry Bradway Represents More Of The Same For The Chiefs 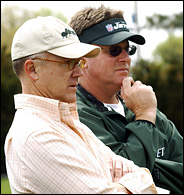 Although many of may not recognize the name Terry Bradway, don't worry.  You're already very familiar with him.  He worked in the personnel department in Kansas City before being hired on in New York.

He was the GM in New York from 2001-2005.  Yep, the same 5 years Herm was the coach. His name has been thrown around as a possible candidate to replace Carl Peterson as GM in Kansas City.   However, his tenure in New York flamed out after multiple drafting mishaps and an apparent inability to build a championship caliber team.

Bradway assumed GM duties in 2001.  In his tenure, he's made several outstanding selections in Laveranues Coles and Jonathan Vilma.  However, he was unable to retain either player (although Coles is now back in New York after a stint in Washington).

This quote from the New York Times on January 8th, 2006 in the wake up Mike Tannenbaum replacing Bradway as GM is very telling:

Then he made himself virtually invisible during this 4-12 season, leaving Edwards to account for the injuries and lack of depth that sabotaged the Jets' mission to win the American Football Conference championship.

Much like Carl Peterson this season (not being seen much around training camp), Bradway didn't give the perception that he was part of the process to rebuild a team that just went 4-12.

This next quote from the New York Times also brings with it an eerie feel of familiarity.

That could not come soon enough, since Bradway's contract has two years left, which means this season is something of a make-or-break affair. While Coach Herman Edwards was given an extension after last year's dismal showing, Bradway was not. In fact, Bradway was most likely the biggest proponent of giving Edwards a new deal.

"Herm had to have stability," Bradway said. "And so I think now we've developed that stability a little bit."

Are you seeing the trend?  Check out this fan's letter to Bradway in 2003:

Vinny is still a QB that can move a team downfield but he was never a fit in our offensive system and is the exact opposite QB than Pennington as far as pure throwing. When Pennington went down I knew we could not be competitive... how come none of the Jets Management had the foresight to realize that and bring someone in who fit our system a little better so we could at least be competitive?

Sound familiar?  Because it is.  Terry Bradway represents more of the same.  Clark Hunt appeared adamant about the notion that the team's next GM would come from outside the organization.  A fresh set of eyes.  Someone with no ties to the organization.

And that ain't Bradway.