Getting to Know a GM: Scott Pioli

Share All sharing options for: Getting to Know a GM: Scott Pioli 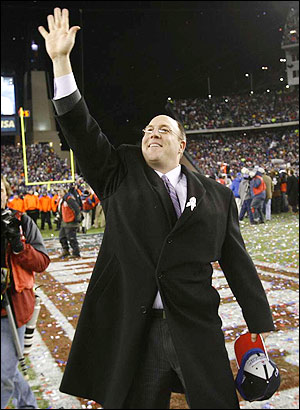 The past several offseasons have seen Scott Pioli's name thrown around as a potential candidate for various GM openings. The main thrust behind the notion that Pioli would make an excellent candidate is his relationship with Bill Belichick.

He began his career as an executive when he joined Belichick's staff in Cleveland in 1992. With no prior experience he was hired as an assistant in the personnel department. He was in charge of college scouting and some contracts. After Belichick's departure he was promoted to director. He later joined Belichick in the personnel department with the Jets and again followed him to the Patriots where he's been promoted to VP of Player Personnel.

He's won multiple Executive of the Year awards from an array of media outlets. Under his watch, the Patriots have established a winning culture whose highlight is the idea that no player is above the team.

His draft successes include Asante Samuel, Logan Mankins and Vince Wilfork...all Pro Bowlers. Deion Branch, while not a Pro Bowler, actually went up in value when he was traded to the Seahawks for a 1st round pick.

Aging player? Cut him. A chance to upgrade at a position? Do it. He's demonstrated an ability to build a winner (Cleveland), deliver a division title (New York) and a Super Bowl victory (New England). His track record of success is unparalleled across the league which is why he is the top name for GM positions every offseason.

He has been a coach before as an assistant at Syracuse and then coaching both sides of the line in successive years at Murray State. This shows that he knows what it takes to build a winner (keying in on the offensive/defensive lines).

Why would he come to Kansas City? In January 2007, Pioli declined to be interviewed for the Giants GM opening. Pioli has ties to the New York area (and his wife is the daughter of former Giants coach Bill Parcells) which is the largest media market in the country. Seems like a dream job, right? Apparently not. Pioli chose Belichick.

He's been mentioned as a candidate for the Lions' job and the Browns' still-not-available GM job. But there's been no word from Foxboro on his interest in either.

Those who are being patient with the rebuilding process are met with skeptics who say Miami and Atlanta turned it all around in one year. Enter Scott Pioli who is the son-in-law and former co-worker of Bill Parcells, the architect behind the rebuilding project in Miami. He was also the superior to Tom Dimitroff, the current GM of the Falcons.

Some might say that Pioli's success is due more to the genius of Bill Belichick. However, one must only look to Tom Dimitroff's success to deny that claim. Dimitroff was further away from Belichick and is still successful. All of Pioli's attributes make him an attractive GM candidate and should be the Chiefs #1 target.