Getting to Know a GM: Floyd Reese

Share All sharing options for: Getting to Know a GM: Floyd Reese 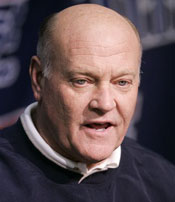 Floyd Reese brings several valuable attributes to the table when talking about the Chiefs GM job. His experience combined with his track record of success (and apparent interest in the job) make him an intriguing candidate.

He is a former All-American defensive tackle for UCLA. His rise in the NFL included several stops that make him an interesting candidate for us to look at.

Strength and conditioning coach for Detroit and San Francisco. We've harped on the S&C staff of the Chiefs since the Chiefs have shown the ability to disappear in third quarter and crucial parts of the fourth quarter.

Linebackers/Special Teams coach for Minnesota/Houston Oilers. He eventually became the defensive coordinator for the Vikings but the fact that he's worked with linebackers and special teams before, both weaknesses of the Chiefs, begs the question of whether he's a legitimate specialist (as opposed to a Gunther "specialist) in that area and can bring in players that will fill our needs.

In 1994 he was elevated to the status of General Manager for the Titans. He held this position until 2006. His first (and probably best) move was to hire Jeff Fisher who is still currently the head coach. Some major moves include drafting Steve McNair and Eddie George.

In those 13 years he created an atmosphere of success tallying 111 wins, 1 Super Bowl appearance, 2 AFC Championship game appearances, 4 playoff appearances and 5 playoff victories. While most of his success came during the 1999-2003 seasons, his track record speaks for itself.

Reese has been doing work for ESPN since his departure from Tennessee in 2006. Back in February, he wrote an article that listed who he thought was the 5 best talent evaluators in the NFL. No surprise here: Bill Belichick (Patriots), Ozzie Newsome (Ravens), Bill Polian (Colts), A.J. Smith (Chargers) and Ted Thompson (Packers).

He also gave his top priorities for a talent evaluator which includes the ability to identify a player (experience at the position is needed), put a team together ("unless you have worked the process several times, the chances of success are slim."), and make the tough decision (even if it's unpopular).

In an interview with the New York Times prior to the 2007 NFL draft, Reese described the process of filling holes once the season has started. First, he says you retain your own guys. Second, enter free agency and plug holes there. Third, address remaining holes in the draft. It seems easy enough, but this is a process that was lost on our Carl Peterson.

Very much like Herm, Reese places an emphasis on character. This statement is very telling:

Character is the main reason a sixth-round draft choice can become the league MVP. High-character players are aware of their value and they understand exactly what is expected from them. Of all of the intangibles, character allows teams to hit on a sixth-round pick, but it is also capable of making a first-round picks a bust.

It's especially telling for a guy that selected Pacman Jones. He's got the right idea behind character guys, but his past history indicates he's whiffed big before.

The big knock against Reese is his inability to manage the cap. As WPI put it, "He nearly bankrupted the Titans and only this year have they been in a position to free themselves of the numerous big time contracts that crippled the franchise." Sound familiar?

He's been linked to the GM job in Detroit. In fact, he lobbied for the job earlier this year:

"If I had Williams Clay Ford's number, you'd be hearing a dial tone right now. I'm in a unique situation. I've been in the league 32 years. ... I could be in Detroit tomorrow.

"One of the real uncut gems in the NFL is Detroit. It has a great owner. He's got a lot of money. He wants to win very badly, and he's not one of those guys that's on the sidelines. He just wants to find someone that can help him win."

Except that the Ford's have had a terrible franchise for decades and their current business is part of the big bailout.

More recently, Reese may have jumped the shark in assuming Cleveland GM Phil Savage would get the boot when he campaigned for the still-not-available Browns' GM job:

''When I look at organizations and potential jobs, you always look at do they have what it takes to win. That's an owner willing to invest, the facility, the stadium, the fan base,'' Reese said. ''Cleveland's got all of that."

While his tact can be questioned for lobbying for a job that isn't yet available, his track record of success makes him an intriguing candidate in the NFL.