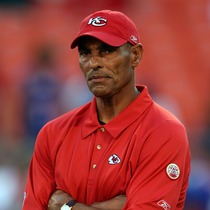 Yes, I know that Carl Peterson's resignation has been like the lifting of the Iron Curtain for a lot of you. Excitement and celebration is warranted, mind you. I can't sit here and say I'm not excited to see what happens over the next couple of months for the Chiefs. Peterson's resignation is the biggest Chiefs' story in the last couple of years and I don't believe that it's significance has been understated here.

Our new GM is not guaranteed to do a great job. Periods of transition like this aren't necessarily beneficial to an NFL team.

I do think that that Carl Peterson's presence, especially in the 2000s, really harmed the Chiefs' chances to win. I believe his strategy and personnel decisions had a direct impact on wins and losses over the years. And yes, I know that's the understatement of the year.

With that said, we've repeatedly talked about how, going back to last season, Herm Edwards and his coaching staff have been given more control over the football operations and the expense of Carl Peterson's control. About how it's more Herm and his staff's show than anyone else. The "rebuilding" strategy is the best evidence of this. From the Star on Monday:

With the draft approaching last spring, Peterson suggested to Edwards the team sign a handful of high-priced veterans. Peterson said that would ease Kansas City’s transition and might translate into a few more victories. Edwards recoiled, saying those players would steal playing time from the youngsters, and the development of those youngsters was the whole point of the rebuilding.

You can describe Peterson's absence as a new era in the Kansas City Chiefs franchise and in a very public way it is. But the reality is that it's Herm's show and has been since the end of the 2007 season. We just didn't have any formal announcement about the changing of the guard.