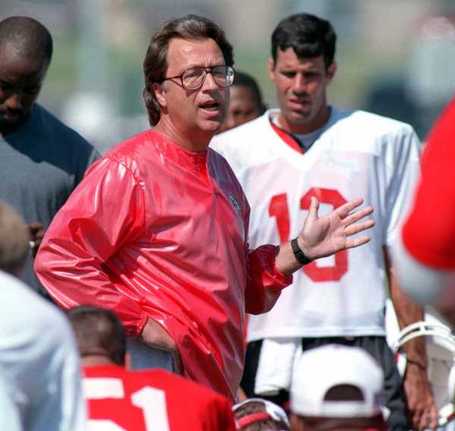 And we've got our first Steve Bono sighting of the day.

This Friday will be the 20th anniversary of Carl Peterson's hiring by the Kansas City Chiefs.  Although he's been running the organization for nearly 20 consecutive years, it's really a tale of two different careers.

Hired in 1989, Peterson and Co. rang up 94 wins and playoff appearances in 7 of 9 seasons.  In fact, he didn't produce a losing season until 1998, Schottenheimer's last year with the team. Here's a chart noting the success in Peterson's first 9 years on the job:

Despite the lack of Super Bowl appearances (0), AFC Championship game appearances (1) and playoff victories (3), a case could be made for Peterson with a track record like this.  Averaging nearly 9.5 wins over a 9 year span is playoff worthy.  He demonstrated an ability to produce playoff teams that fell short due to some fatal flaw every year (QB, kicking game, defense).

He received a pass for some of his late career failures because of moves he made within his first five years as GM.  Some major moves include:

Then, something happened during Schottenheimer's final season.  Peterson apparently lost his touch to produce playoff teams.  Take a look at his win loss record for the final 10 full seasons of his career.

These final ten seasons produced just an average of 8 wins per season.  A drop of nearly a game and a half at the halfway point of his career.  The NFL is full of examples of GMs who are canned after not producing playoff teams in the first 5-7 years ont he job.  Carl was able to take 2 teams to the playoffs in 10 (!) years and still keep his job.

Other than the 2003 team that won 13 games (but had one of the worst defenses in the league), Peterson's final 10 years produced.....nothing.

Schottenheimer was here for 10 years.  Carl got it right the first time.  However, over the next seven seasons, he would hire 3 more head coaches who made it to the divisional round of the playoffs just once.

If there's anything to take from the Carl Peterson Era, it's to know when to cut ties.  There's a reason people are making a big deal out of his departure - because it's insane to keep one guy in charge for 20 years