Questions in Wake of Peterson's Resignation

Share All sharing options for: Questions in Wake of Peterson's Resignation 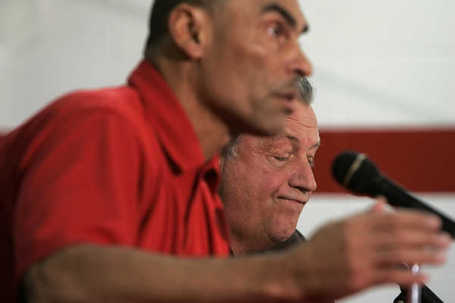 Lots of activity around the site tonight so we wanted to make sure that we had enough posts going to satisfy everyone. Primetime and I worked on this together.

What will happen to Herm Edwards?

Herm Edwards' job has been safe regardless of the status of Carl Peterson. Edwards is the Chiefs' head coach at least through next season (DJ disagrees), even though many fans strongly disagree with that being the case. The Chiefs are in the middle of investing in a lot of young players and Clark Hunt understands that consistency in the coaching staff will be key to their development. This isn't a house cleaning. Clark Hunt appears to believe in Herm Edwards and the direction he's taking the Kansas City Chiefs.

Herm will be around next year. Now if we're still talking about four wins this time 2009, Herm may not be with the Chiefs in 2010.

Are the Chiefs headed in a new direction?

The identity of the Chiefs is established by the coaching staff.  During the Schottenheimer days, the Chiefs' strength was on defense, then Vermeil's days consisted of a powerful offense.  The constant between those two years was the GM. The coaching staffs dictate the direction of the team.  With that said, the GM is responsible for hiring (and firing) the head coach.  In spite of that, Clark Hunt insists he will have final say on the fate of the head coach. History says a new GM will ultimately want his own coaching staff. However, since the Chiefs are in the midst of a rebuilding project, the new GM might want to retain Herm to oversee that process.

Is Carl Peterson completely out of the front office?

If you think that the man who has intimately run the front office of the franchise for the last twenty years is going to lift right out of the picture, you're completely crazy. Carl Peterson has been a friend and a colleague of the Hunt family for decades. He will continue to be involved in the decisions of the franchise, whether directly or indirectly. It's possible he also remains on for a time in an official, advisorship (not a word I know) type capacity.

Earlier this fall, Clark Hunt said at the NFL owners meetings that Carl Peterson would be involved in the selection of his successor. So like it or not, Carl Peterson will remain close to the Chiefs for the foreseeable future.

What are Clark Hunt's criteria for a new GM?