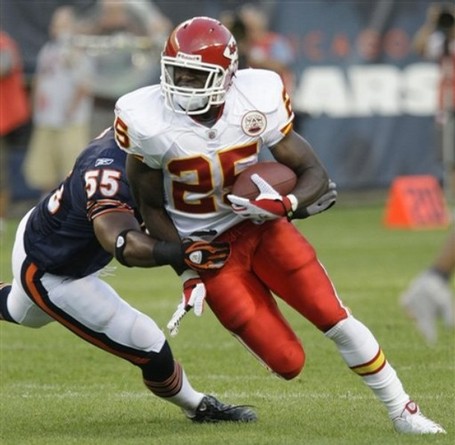 Jamaal Charles and Darren Sproles have a lot in common. They both tore it up in the Big 12. Both were drafted by AFC West teams that already had a 'superstar' running back on the team. Considering they're similar type of backs and have been placed in similar situations, I wanted to know who is better.

Jamaal Charles certainly isn't the focal point of the Chiefs offense as evidenced by the fact that he's gotten more than 7 carries in a game just once (18 against Tampa....106 yards, too). But, he's an excellent change of pace back that's successfully given Larry Johnson 57 less carries.

496 total yards isn't shabby for a change of pace back. And remember, he's just a rookie. In addition, he can return kicks. Although he's just been given the opportunity to do so 7 times this season, he produced 179 yards for a 25.6 yard return average.

Darren Sproles is 5 inches shorter and 20 pounds lighter than Charles but their purpose on the field is the same. While Sproles has been more of a factor in the passing game, Charles has racked up more rushing and receiving yards than the three year vet. This is impressive for Charles because this is the first year LaDainian Tomlinson has struggled so much which would lead one to believe Sproles would get more touches.

Charles has Sproles edged out in the yards per rush category but the Charger has created 2 more touchdowns than our Chief.

The ace in Sproles' pocket is his return ability. He's been given 18 punt returns for an average of 10.4 yards while he's gotten 41 kick returns for a 25.4 yard average.

If the Chiefs decide to increase Charles' role in the return game, his current numbers, albeit a small sample size, look comparable to Sproles. But, do we want Charles to focus on the running/receiving game or the kicking/punting game?

Judging by the statistical drop off demonstrated by Dante Hall when he returned kicks/punts AND played wide receiver, I'd say Charles should pick one or the other. Right now, he's more valuable to us in the rushing game.