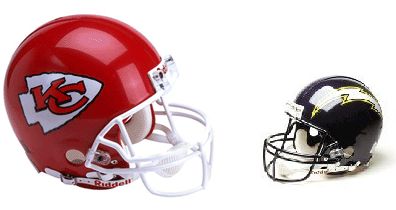 SBN Affiliate: Bolts from the Blue

Coverage of the game leading up to now is here.

Listen online here. Follow the stats and plays on NFL.com.

Find out what NFL games you get on television by clicking here.

A late season intra-divisional game that means relatively nothing? What is this? 2001?

Yes, the lack of a playoff race really takes the heat off of a mid-December Chiefs/Chargers contest.

Nevertheless, the Kansas City Chiefs push on today, looking for their third win of the season and their third win over an AFC West opponent. If any stat points to the failure of the AFC West to remain competitive this year, it's that one. If the Chiefs win today, they will have beaten every other AFC West team.

Sad, yes. Fortuitous for the Chiefs' future prospects in this division? Yes to that too. Sit. Watch. Listen. And keep next season in the forefront of your mind.

This is the third and final Chiefs game of the season. An off season filled with impatience looms mightily on the horizon. Soak up every last bit of live NFL action while you can before we're forced to retreat into the dark depths of free agency and the NFL draft. Take an extra second today to think about how truly great football is to watch live, before your mind drifts back to the fact that the Chiefs are giving up 397 yards a game on defense.

Defense, if you're out there, please show up today.

(Note: I struggled mightily with an appropriate segue to the standard Go Chiefs tag line so just click the play button below to get jazzed up for the game. If you can't see it, I don't know what to tell you.)

"Give credit to the Chiefs, the Raiders have gone belly up on the season; these guys are still playing hard. This is not going to be an easy W."

I really like that quote from Bolts from the Blue.

The Chiefs still have only six sacks on the season. We haven't sacked an opposing QB since the first San Diego Chargers game in Week 10. That's the last four games without a sack. The record for fewest sacks in a season is 11.

The Chiefs made a more official announcement about their training camp plans:

The Kansas City Chiefs have exercised their one-year option to hold training camp at the University of Wisconsin - River Falls in 2009, the site of the club’s camp for the past 18 years, Chiefs President Carl Peterson announced today. The Chiefs may return to the State of Missouri as early as 2010 pending the passage of a $25 million state tax credit proposal which will be determined when the Missouri Development Finance Board meets on Tuesday, December 16th in Jefferson City, Missouri.