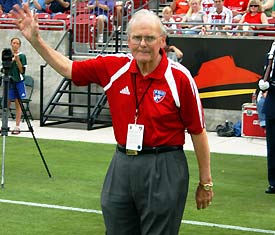 I am too young to fully appreciate what Lamar Hunt meant to this the league, the city and our country.  He was a pioneer that changed the direction of pro football as we know it.  Just to reiterate that Mr. Hunt is indeed the man, let's step back two years and see what folks around the NFL had to say about him and his impact in the NFL.

"His vision transformed pro football and helped turn a regional sport into a national passion. Lamar created a model franchise in the Kansas City Chiefs, but he was always equally devoted to the best interests of the league and the game."

"Lamar Hunt had a dream and, the thing is, we had dreams, too. Just imagine the number of people that he has touched because he said, 'I'm going after this dream."'

"He was a founder. He was the energy, really, that put together half of the league, and then he was the key person in merging the two leagues together. You'd be hard-pressed to find anybody that's made a bigger contribution (to the NFL) than Lamar Hunt"

"When you walked in a room and you saw him and saw he was a part of something, you knew it was something that was branded with integrity and solid and something you could stand behind."

"He was the man who invented the American Football League and coined the term Super Bowl, but when Lamar was talking about soccer there was that glint in his eye. It's just something very special and when the books are written, the book on American soccer is going to have chapters on Lamar Hunt and what he did both in the past and the present for the game here."

"He was so instrumental in making tennis what it is today. He just knew the game hadn't been tapped in bringing sponsors in and creating it as a business and not just a game."

Wow.  You'd be hard pressed to find another man that commands the respect of some of the most powerful people in the country.  Football?  Check.  Soccer?  Check.  Tennis?  Check.

Here's a cool video of Mr. Hunt.  The music is a little cheesy but the pictures go all the way back to the 60s.