Share All sharing options for: Confirmed: Tony Gonzalez The Best In Football 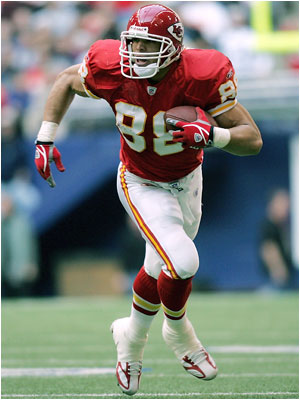 I just wanted to reaffirm what we all knew.  Tony Gonzalez is the best tight end in football.  At age 32, many people around the trade deadline balked at the idea of acquiring Gonzalez for the stiff price of a 3rd 2nd round pick.  Who's laughing now?

The argument against Gonzalez that I hear most often is that he's the Chiefs only target.  That's just false.  Take a look at the leading receiver (or in the case of the Seahawks the second leading receiver) for each team and see how our "#2" stacks up.

Not too shabby if you ask me.  Dwayne Bowe has as many receptions as the leading receiver for each tight end's respective team.

What does this mean?  Well, I hope it means that Gonzalez has plenty left in the tank to grow a few more years with this team.  Or, the next best thing, this season will reiterate to potential trading partners this offseason that Tony can play at a high level past next season.  He's only missed two games in his career and this season he's putting up numbers that will rival (but probably not beat) his 102 reception season in 2004.