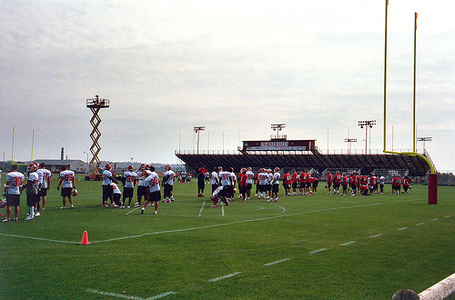 It's not official yet but it appears that the Kansas City Chiefs will move their training camp location from the University of Wisconsin-River Falls in River Falls, WI, to Missouri Western State University.

The Chiefs have committed in writing to move their summer training camp from Wisconsin to Missouri Western State University — including a $10 million donation — pending the success of a $25 million state tax credit proposal, according to Missouri Development Finance Board documents that were released Thursday.

I'm not sure on the exact likelihood of this tax proposal passing but it sounds like a pretty sweet deal for Missouri Western State.

If the deal is sealed, the Chiefs would donate $10 million from the sale of the tax credits to Western for a new indoor practice facility — the future site of the training camp in 2010 and for the next 10 years as long as the facilities are constructed.

With the Chiefs closer to Kansas City, it's likely they're going to get a ton more people to come watch their training camp practices. You can tell from the photos of camp that the River Falls citizens get really jazzed up for Chiefs training camp. I'd guess there are at least a couple hundred people there each day when camp starts but then again I've never been. Holding camp in St. Joseph, about fifty miles north of Kansas City, has the ability to bring probably thousands of different fans to camp.

Personally, I liked the fact that the Chiefs were one of the few NFL teams to do the old school, solidarity trip out of their home city for training camp. But holding camp closer to KC could be really cool to check out each year.