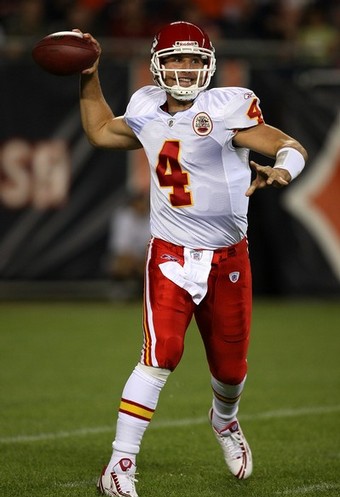 Thigpen wants to run the table down the stretch:

"It has gone by quickly. If you look at it from a record standpoint, it might be long. But we look at it as a team, we feel like we made some progress and we’re going in the right direction this year. So when it comes down to that, you said there’s three weeks left, how nice would it be to go out on top in these last three weeks. From a team standpoint, that’s one thing we’re looking forward to doing."

We've talked before about how important it is for the Chiefs to run the table down the stretch.  In 2006 the Packers were much like the Chiefs.  Youngest team in the NFL and out of the playoff race.  Sitting at 4-8 they could run the table and establish momentum for next year.  Or they could lose out and select a player in the top 10 of the draft.  They chose the latter and their 4 consecutive wins to end the season likely had something to do with the 10-1 start in 2007.  The more I think about it, the more I realize how important it is for the Chiefs to win down the stretch.

Thigpen's personal goals for the season:

"Yeah. Three wins would be a great success. As a team goal we want to come out and win all three of these games and look forward to next year because obviously we’re not in the playoff race or anything like that. So why not give us a reason to build on something next year? That would be nice."

Despite the statistical success that came out of nowhere, he knows he lacks in one major category:

"No, not at all. If I felt like I’ve done all I could, I would hope that I would feel like we should have won all those games. I know for myself, I’m a competitor and when it comes down to it, yeah I might have the stats so it looks good, but when it comes down to it, the win-loss record weighs heavy on a lot of people’s minds. Right now I’m not favored in that category. I don’t feel like it’s been a success for myself."

Gotta disagree here.  I think the majority would say he's done enough to win the job.  The wins/losses are important but so is a quarterback that throws for 200+ yards a game and sports a 3:1 TD:INT ratio.  Past history would indicate that numbers like those are likely to put a team in a position to win.

On giving Tony Gonzalez too many looks:

"I feel like I’ve done a good job of spreading the ball out. Yeah, I might have gone to Tony a little more often that somebody else, but he’s the guy you lean on. When you get him one-on-one, any day of the week, close coverage or off coverage, I feel like he’s going to win. That’s nice as a young guy, to have that. The other receivers and running backs have done well also. I couldn’t have done any of this without the offensive line, so give them a lot credit."

Excellent point.  If I've got a one-on-one with Tony Gonzalez, that's where I'm going.  He's done it his entire career so why change it up now?

On the losses being close:

"Yeah. There’s always things when you go back and watch the film, where you can say, ‘oh if I’d have done this or if I’d have done that.’ Those are things that you can’t fault yourself on. You’re out there and it’s a natural instinct, to make the reads that you make. You know, maybe I could have held on to it longer and waited for Tony to get open. But if I sit back there and one of the linemen gets beat and I get sacked, then we never had a chance to get it towards the goal line."

He has a great head on his shoulders.  It's almost refreshing.

The rest of the press conference can be seen and read here.