Big Test for the Chiefs' "Gimmick" Offense This Weekend

Share All sharing options for: Big Test for the Chiefs' "Gimmick" Offense This Weekend 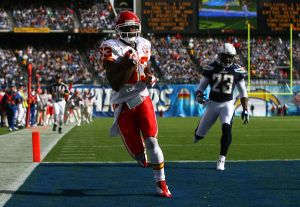 In the great debate about whether or not to carry the spread offense into 2009, this weekend's game against San Diego is a major test. Not the only test but a big one.

It's not because of San Diego's defense prowess. Their D is ranked 25th in the league.

It's because the Chargers will be the first team to face the ArrowSpread game plan twice.

In the teams first meeting, the Chiefs were a two-point conversion away from winning the game in the final seconds. Tyler Thigpen threw for 266 yards and three touchdowns. The rushing attack faltered big time without Larry Johnson.

The spread sort of worked in this game. Two touchdowns in the first half showed promise but then an over reliance on the pass forced three 3-and-outs in the third quarter alone. The lone second half score came in panic time as Thigpen led an awesome 14 play, 60 yard drive to nearly time the game.

It appeared that the Chargers "figured" out the spread in the second half of the game. But then again, the Chiefs have been absolutely terrible coming out of halftime this year. I'm going to chalk up San Diego's second half defensive success to superior half time adjustments than to the failure of the spread offense. It worked in subsequent games and the Chargers didn't appear to come up with any silver bullet to stopping the Chiefs. Herm (and Chan Gailey apparently) can't coach well in the second half of football games. Period.

If the spread offense is here to stay, the Chiefs should be able to complete a similar effort this weekend as they did in Week 10 against the Chargers.

The key here is not look for huge improvement- San Diego has already played us and knows what's generally coming- but to see if the spread offense can survive a game plan that is familiar with it and is going to be specifically designed to stop it.

If the offense falters this weekend, the spread offense could certainly be to blame. I don't know how things will turn out. But if it does fail, my bet is that it fails because of poor second half coaching.

The Chiefs' offense will be under the microscope this weekend and every weekend for the rest of the season. And our coach's second half adjustments should be under the microscope too. This isn't a zero sum game- both will likely be to blame if the Chiefs' lose. The arguments for and against keeping the spread offense need to factor in our coach's ability to execute it effectively.

Big test against San Diego. Should be fun to break this game down come Monday.