Chiefs Needed a Boost and Got One from the Raiders

Share All sharing options for: Chiefs Needed a Boost and Got One from the Raiders 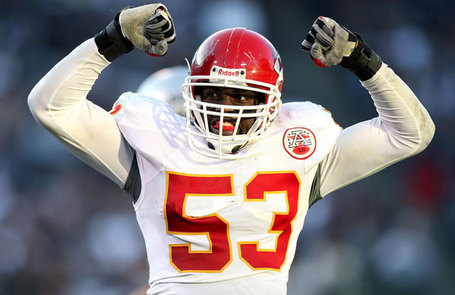 You don't always have to play your best to beat another team. Sometimes you have to be just a touch better than your opponent. That's what the Chiefs were on Sunday- a touch better than the Raiders. No blowout. No gaping holes in the stat sheet. Just a couple of breaks went our way and the defense finally held an opponent back in the 4th quarter.

It was fun to watch the Raiders bungle their way out of a win. You kind of knew it was going to happen which makes it all the more funny when it did.

One of the biggest difference makers in the game was Tony Gonzalez. Gonzalez led all receivers in catches and yards yesterday, catching 8 passes for 110 yards. On the Chiefs only offensive drive for a touchdown, Gonzalez caught two 3rd and long passes for first downs, using his big body as a shield against the very capable but inferior Raiders' secondary.

Tony was feeling good enough yesterday that he was giving advice to Raiders' RE Zach Miller.

Still can't impose our will

When I say "impose our will", I'm talking specifically about being able to play the game we want to regardless what the opponent's defense is playing. The biggest test of imposing our will came, of course, in the 4th quarter.

The Chiefs were up by 10 points with 7:50 left in the game. As soon as the Chiefs got the ball on this drive, I really wanted to see them mount a 4-5 minute drive and just take the game completely out of the Raiders hands. Larry Johnson had been successful running the ball pretty much all day so I figured the Chiefs had a decent shot to convert some first downs rushing the ball and take away a big chunk of the clock.

Now to be fair, the Chiefs were able to convert first downs on their last possession of the game, effectively ending it when Larry Johnson ran for 15 yards with two and a half minutes left. That was impressive. Regardless, when the Chiefs' offense has left the door open before, it usually hasn't been good. The defense making that critical stop is the exception to the rule.

No more half time naps

The evidence that the Chiefs are getting out coached after halftime grows from week to week.

I think we have an acceptable offensive line now

Funny thing is, even though the Chiefs offensive line is playing as well as they need to play, a few of these starters aren't going to be on the team next year. Thigpen's mobility and Mike Cox's blocking are welcome additions to the offensive attack this year and probably the two main reasons we're not screaming at the o-line every week. To think that the Chiefs would go from having one of the worst offensive lines in franchise history to one that doesn't make the weekly headlines, you have to be satisfied.

One of our, ahem, two rookie D-II starting corner backs, Maurice Leggett has been playing well above his expectations. Sort of a Tyron Brackenridge of 2008, Leggett has been picked on the last month or so by opposing teams who would rather pass away from Brandon Flowers and others.

On Sunday, he returned the Raiders laughable attempt at a fake field goal for a touchdown and added five tackles. Like Brackenridge, Leggett may be around next year to continue his play as the nickel cornerback but keep in mind that his name is getting called a lot because teams are picking on him. As excited as fans may be about him, history says it's likely he won't be here for long.

Larry Johnson ran the ball pretty well and it was Johnson's 15 yard run late in the 4th quarter that effectively won the game for the Chiefs.

The offensive line is doing an improved job of getting moderate running lanes open and our running backs are taking advantage of them.

Tyler Thigpen has essentially been the Chiefs' number 2 running back the last few weeks. He ran the ball 11 times on Sunday. Jamaal Charles only rushed the ball twice.

Our running game is performing at about the appropriate level of production relative to our offensive scheme. 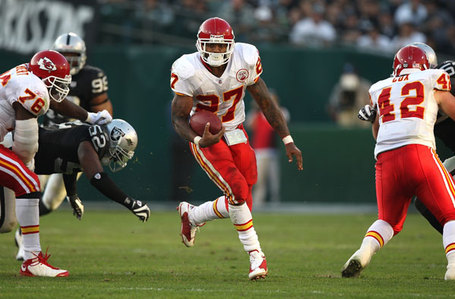 One of the things that annoys me most about Derrick Johnson is that he'll only have three, maybe four really good games a year. Yesterday was one of those games.

Johnson amassed seven tackles and a number of big time hits against the Raiders. He was pumped up and briefly appeared to be a defensive leader, something the Chiefs desperately need.

Yes, a win is a win. But in the grand scheme of "progress", it would be tough to take a lot away from the Chiefs' defensive performance. Raiders QB Jamarcus Russell 10/28 for 132 yards. Seven of those completions and 103 of those yards came in the first half.

Russell, not unlike the whole Raider team, was not aggressive in the least and looked to me to be overwhelmed at times during the game. His ability to process real time football information seems to be lacking.

Tyler Thigpen's tendency to throw the high ball showed back up again yesterday. On multiple occasions, Thigpen's passes soared way above their intended targets. A more capable defense has at least one more interception of Tyler Thigpen.

Even with those mistakes, it's pretty much impossible to root against this guy. He's established a fantastic rapport with his receivers, especially Tony Gonzalez and Dwayne Bowe. For the most part, Thigpen's timing was great against the Raiders and that has been one of his big improvements on the year.

It's tough to celebrate this win because it's only our second win of the season and it wasn't especially pretty. The Raiders made mistakes and the Chiefs capitalized. A rather boring contest that probably won't be repeated next week in Denver against the Broncos. The Broncos are ranked 27th against the pass which has to make Tyler Thigpen smile.