Share All sharing options for: Chiefs-Chargers Week in Review 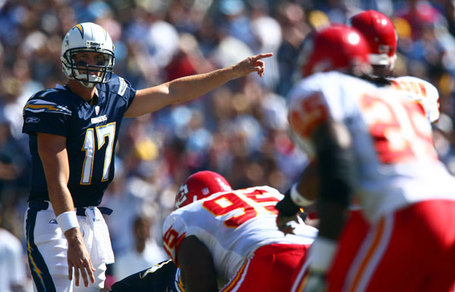 I feel like it's been a haphazard week of coverage here at Arrowhead Pride so I wanted to take a minute to recap all the going ons of this past week. We've had roster moves, injuries and all that other good stuff to talk about. Here we go...

I'm sure you saw Kolby Smith go down in last Sunday's game clutching his knee and it turns out he is done for the season and has been placed on injured reserve.

LB Derrick Johnson strained his hamstring against the Bucs and is out for this weekend's game.

S Jarrad Page (groin) and CB Pat Surtain (quad) both did not practice on Wednesday or Thursday. Surtain has already been ruled out for Sunday's game and the team has left open the possibility of Page playing.

S Dajuan Morgan tweaked his leg a bit in yesterday's practice, prompting Herm to say, "We’ll see where he’s at." Finally, DE Turk McBride is also listed on the injury report with a shoulder problem and both are questionable to play this weekend.

Because of recent issues with corner back play, the Chiefs signed CBs Richardo Colclough and David Macklin this week. They also added RB Omar Cuff to the practice squad and DE Wallace Gilberry to the active roster.

WR Kevin Robinson and TE Michael Merritt, both 2008 rookies who have yet to see the field, were activated this week. Merritt was placed on Reserve/Non-Football Injury on August 30th, while Robinson had been on Reserve/Physically-Unable-To-Perform since August 26th. Merritt won't play this week but may get a chance later on in the season. Robinson is currently third on the depth chart for the kick return position, making the possibility of him taking the field small.

To make room for these new additions, the Chiefs cut P Steve Weatherford, because Dustin Colquitt will play this weekend. TE John Paul Foschi and WR Nate Hughes were let go as well. Finally, just-signed CB Tyron Brackenridge was let go and DT T.J. Jackson was put back on the practice squad after spending time on the active roster.

With Kolby Smith out for the rest of the season and Larry Johnson suspended this weekend, Jamaal Charles steps into the starting role, with Dantrell Savage backing him up. Right before last week's game against the Bucs, RB Jackie Battle was promoted from the practice squad which now makes him the #3 running back.

The full depth chart is here.

The 3-5 San Diego Chargers are coming off of a bye week and Chris Jenkins of the San Diego Union-Tribune gives us a quick synopsis of what's happening in San Diego:

The location of the bye week couldn't be any better, what with the Chargers precisely at the halfway point of their season, coming off two straight losses, road-weary from a trip of more than 11,000 miles across eight time zones. They've used the break to install a new defensive coordinator, Ron Rivera, and get themselves back into their best physical health of the season.

The Chargers literally are in the best team health of the season, with only WR Chris Chambers and CB Antonio Cromartie limited in practice and their center is out with an illness. Both Chambers and Cromartie are likely to play on Sunday.

Of course, the biggest news coming out of San Diego over the bye week was the hiring of inside linebackers coach Ron Rivera as defensive coordinator. The Chargers' 25th ranked team defense caused former Charger DC Ted Cottrell to be fired after giving up 37 points in Week 8 to the New Orleans Saints.

Quick look at the Chargers:

That's what I've got for this morning. The Kansas City Chiefs play a rare 3:15 PM central time game this weekend so make sure you come by for the open thread.