Share All sharing options for: The Emerging Tyler Thipgen 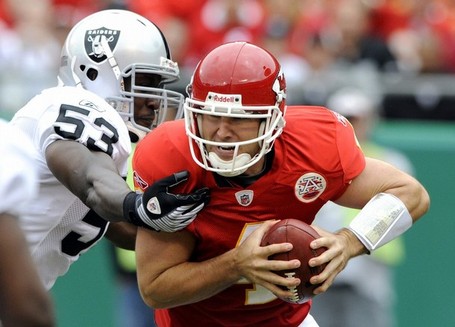 After two fantastic performances in a row, Tyler Thigpen is obviously settling into his role as the leader on offense. Still, he's quick to credit everyone but himself for the team's recent improvement on offense. Here are a couple of snippets from his Q&A today.

On attributing the recent success on offense to himself:

On the spread offense increasing in the NFL:

You’re asking the wrong guy. I did it my senior year. In college I did both kinds of systems. When you come into the NFL, where it’s usually just the under center and then third down you’re in the gun, it’s nice – the Shotgun – for a lot of quarterbacks. I enjoy being back there and I feel like I can see the defense a lot better.

On being in the huddle:

I feel like I have a lot more confidence in the huddle. When I call a protection, looking at the offensive line, when I call a Z receiver, I look at Tony when I call his certain play. That’s just knowing your offense and just being mature and having confidence that you know exactly what you’re calling. That’s come a long way since I first started.

Call me crazy, but in a little over a month, I've gone from not believing for one second Tyler Thigpen is an NFL quarterback to contemplating him at a starting role in 2009. Keep up the good work, Thigpen.