Grading the First Half of the Chiefs' Season

Share All sharing options for: Grading the First Half of the Chiefs' Season 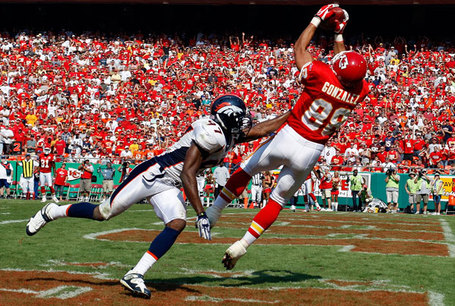 It's mid season. It's mid week. About time to dish out some grades for the first half of the season, don't you think?

The grades I'm throwing out are based on performance against preseason expectations.

It's goes without saying that the Kansas City Chiefs quarterback situation has been a freakin' disaster this year. It's also a bit hard to grade based on expectations because of the constant personnel switches but it's pretty safe to say that the Chiefs quarterback position has been a disappointment this year. We're looking better and better as Tyler Thigpen continues to lead the charge but both Damon Huard and Brodie Croyle were rarely effective when they were on the field.

The Chiefs are currently middle of the pack in rushing the ball, ranking 14th in the league in rushing yards per game. I didn't have big expectations this year for Larry Johnson or any of the running back crew, which tempers my grade a bit.

After ending 2007 as the NFL's worst rushing team, I think you have to hand it to the 2008 crew for improving by leaps and bounds.

The Chiefs offensive line was probably the team's biggest concern heading in to this season and the line has very quietly done a decent job. They still give up too many sacks- 23 on the year to be exact - but they are improving from week to week, which is exactly what you want to see in a new, young group of guys.

Let's see. The Chiefs are ranked 31st in the league in overall defense. They rank last against the run. The defensive line not only hasn't improved on last year but they've digressed. I didn't have high expectations for this defensive line in 2008 but you simply cannot give up as many rushing yards as the Chiefs have and not give this line a near failing grade.

There's Dwayne Bowe, Mark Bradley and...nobody. No rookie Chiefs wide receiver has produced anything on the field. The rest of the receiving corp is so invisible I often find myself having to look up their names.

I say it every week- Thank goodness for Tony Gonzalez.

Well, unfortunately real life is intruding at the moment so we'll have to finish up the other positions tomorrow. Thanks again for your patience as of late. My work during the day is really heavy and I haven't had the normal amount of time to dedicate to AP that I usually do.

Your grades for the Chiefs so far this season?