Share All sharing options for: The Chiefs' Offense is Finally Moving Forward 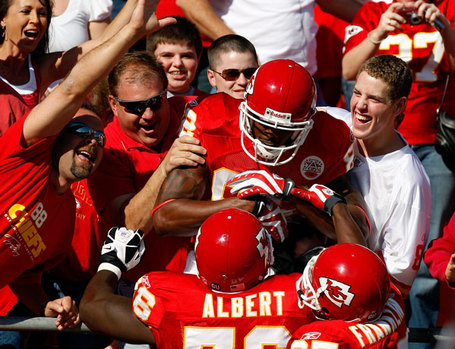 After running the spread/wildcat offense for two games, the Kansas City Chiefs blew up the box score on Sunday with their best offensive statistical game of the year. The basic philosophy of the spread offense is to use multiple receiver sets to stretch the defense across the field, which theoretically opens up passing and running lanes.

Chan Gailey's tweaks on the spread offense put up 27 points against a solid Tampa Bay Buccaneer's defense. Here's some stats from Sunday:

Let me throw out what you've been discussing in the comment sections for the last two weeks and what's already obvious- the spread works and works well for this team. Last season, with our even more terrible offensive line, I argued that the shiftier Kolby Smith was a better fit at running back for the Chiefs. I made that argument based on the reality of the situation because the Chiefs' line dissolved immediately necessitating a running back with lateral moves. I'll keep supporting Chan Gailey because this spread offense is working. We're not winning (yet) but there is improvement Chiefs fans!

One thing the Chiefs will need to figure out is how to maximize the use of surprise. Undoubtedly, when Jamaal Charles pitched that ball back to Mark Bradley before he threw it, the Bucs defense was confused. Tyler Thigpen ran right by the last man in the Bucs' secondary for a wide open touchdown. I'll be curious to see how Chan Gailey keeps the surprise factor going and see how defenses game plan against the Chiefs over the rest of the year.

For the first time in, let's say 17 games, I'm encouraged by the Kansas City Chiefs offense. I actually believe they will improve next week against the Chargers. I like Tyler Thigpen. Our offensive line is definitely getting better. I'm almost ready to accept the current path of our offense and only be sickened by our defense. Our defense hangs like an albatross around the team's neck, penance for our previous transgressions.

The Chiefs' offense is moving forward and it's taken the spread offense to do it. Crazy, huh?