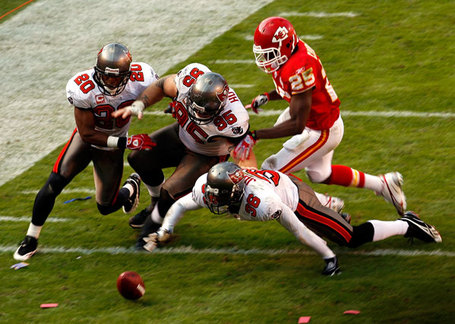 Before we jump into more specific opinions about yesterday's game, I wanted to mention that for the first time in a long time, I had a lot of fun watching the Kansas City Chiefs yesterday. The team was inspired, energetic and for a brief time yesterday, you saw a break in the clouds. Will that sunshine last?

I may buy a Tyler Thigpen jersey

I know I'm not the only one surprised with Tyler Thigpen's performance the last two weeks. I thought that those two performances, if Thigpen was even capable of them in the NFL, were years of development down the road.

I love the energy he brought yesterday. I love the TD catch from Mark Bradley. I love his much improved scrambling ability. To date, he's easily the 2008 Chiefs most exciting player.

With Kolby Smith injured yesterday and out for the rest of the season, expect the Chiefs rushing attack to get a bit weird. Jamaal Charles, Dantrell Savage and Jackie Battle will man the rushing corp but don't forget about Tyler Thigpen. Thigpen is currently third on the team in rushing (103 yards) and was already ahead of Kolby Smith in rushing yards on nearly half the attempts.

Averaging 5.1 yards a rush and totaling 183 yards on the ground, this was the third best rushing effort by the Chiefs this season. The 183 yards on the ground yesterday is more than the three previous week's rushing totals combined. The Chiefs also were able to run the ball 36 times, which usually means a win for Kansas City if that happens.

With Kolby Smith leaving the game in the second half with a season-ending knee injury, Jamaal Charles ended up with 18 carries on the day. I hate to see Kolby Smith injured but this does let us see, rather early on, how much of a load Jamaal Charles can handle as a starting NFL running back. I'm still shocked by his fumble in the 4th quarter but it's tough to be hard on the guy when that's about his only mistake.

Spreading the ball around

Since the trade deadline, I've noticed a certain tenacity in Tony Gonzalez's play that wasn't there before. I'm not questioning his desire whatsoever. I'm talking about him fighting off tackles and throwing defenders to the ground. He's being much nastier than he's ever been before and I wonder how much of that is out of frustration.

Never thought I would be saying, "Thanks for Mark Bradley!" But I am. The Chicago Bear transfer has made Chiefs fans wonder what receivers we were even arguing about playing during the preseason. Jeff Webb? Doesn't play. Devard Darling? Very average wide out. But Mark Bradley? Yeah, Mark Bradley.

Like Primetime mentioned, it was a tale of two halves. For a change, the Chiefs started hot but eventually gave up a 21-point lead to lose the game.

Bolstered by a trick play and a fumble recovery, the Chiefs busted off three straight touchdowns to start the game but only managed six points after that.

Going back to last season, this team has always had trouble playing two good halves of football. There are other explanations for that but I think a good argument can be made that it's the coache's inability to game plan for an entire 60 minutes that hurts us the most.

I'm happy the Chiefs nearly won the game but if you are +3 in turnovers and you don't win, something is wrong. The Chiefs are +6 in turnovers the last two weeks and do not have a win to show for it.

No, there isn't another chance in overtime

When the Bucs got the ball first in overtime, they marched down the field in 9 plays and promptly kicked the game winning field goal. The Chiefs gave up ground and played like they had a chance to come back and score a touchdown to win. If the Chiefs don't dissolve on that drive yesterday and the Jets final drive two weeks ago, this team may be 3-5.

If there was a report card for this game, it would read Satisfactory. And the parent-teacher conference would go something like, "Your child isn't as quick as the other children but I think he'll turn out fine."

Yesterday was fun to watch and will spurn even more good conversation this week. A narrative of sorts is in it's infantile stages and I'm smiling because of that.