Chiefs Do Everything They Can to Ensure Loss to Bills

Share All sharing options for: Chiefs Do Everything They Can to Ensure Loss to Bills 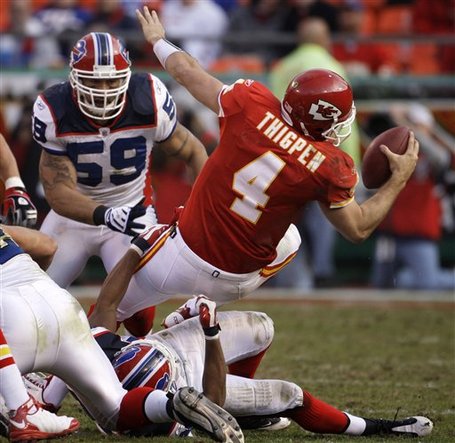 While the Chiefs may not have a net improvement of the team overall, the offense is significantly better than the offense we saw at the beginning of the season. That's a fact.

The one positive stat is that the Chiefs had more yards of total offense than the Bills, 462 to 444. Oh, and we rushed the ball for 159 yards but it was largely ineffective.

The Chiefs' defensive coordinator has pretty much gotten a free pass from the local media and this blog. That really needs to stop. At some point, when your team is ranked last in every major defensive category and has given up the will to fight hard during games, you have to blame the coordinator. You just have to. Here are how Cunningham's Chiefs' defenses have ranked in his second tenure with the team.

Below average rankings, at best with 2008 the icing on the cake. His rush defenses have ranked 12th, 7th, 18th, and 28th respectively. Cunningham is inconsistent and he provides little hope for the future.

He doesn't contribute much on defense. If he eventually doesn't work out, that would fit perfectly in line with the Chiefs' drafting issues. No surprise here. Same with Derrick Johnson.

It was more amazing that Thigpen didn't have a game like this earlier.

It wasn't just that he threw two interceptions. It was that the INTs he threw directly led to the late first half rally by the Bills that, looking back on it, was the back breaker of the game. Knowing the Chiefs' 3rd quarter woes, who really thought the team would come out firing? Sad to say, I didn't think they would.

Despite a tendency to under throw the long ball, Thigpen's arm strength, accuracy and decision making are all improving weekly. I have never been more wrong in my initial assessment of a player than I have been with Tyler Thigpen. He's pretty good.

Too bad about the running game

The Chiefs only had five rushing attempts in the first half and one of those was by Tyler Thigpen. We ended up with 13 attempts and 159 yards which is an awesome stat. Too bad it didn't matter at any point in the game. The Chiefs were playing catchup from the second quarter on.

Larry Johnson was looking pretty good in the first half but it's the same trap almost every week. The Chiefs are playing catch up and catch rely on the running game.

Remember that crazy stat about how the Chiefs are #2 in the turnover ratio? That bubble popped. After giving up 5 turnovers on Sunday, the Chiefs are tied for 10th in the league.

It was really four turnovers because one of those happened with no time left in the half on a kickoff. Two of them were fumbles and like I said before two were INTs by Tyler Thigpen.

The turnovers absolutely destroyed the Chiefs and they were turnovers that haven't been a normal part of play for the Chiefs in the last month or so. September Tyler Thigpen reared his ugly head for a couple of interceptions but didn't stay around long enough to completely discredit a three-touchdown day.

The kicker with the turnovers is that we didn't force any ourselves. I figured we were good for a strip or at least an INT, right? Trent Edwards had been throwing every defense interceptions for the last four games and the Chiefs didn't capitalize.

We make it too easy sometimes

1/8 on 3rd down? Another "free" touchdown on Leodis McKelvin's pick six?

You have to hand it to the Chiefs sometimes. We make other teams look good. Need to get back on track? Scroll down the schedule and wait until you play Kansas City.

If the Chiefs have another repeat performance of the Carolina game later this season, then that is rock bottom. But for now, I can't call a game where the Chiefs score 31 points rock bottom.

What are we doing?

Where's the urgency? Where's the push? What is the team doing to fix it's defense?

I know we can't scrap the whole defensive team this long into the season. I just want to know who's going to stand up and say I'm accountable for giving up the most points in Kansas City Chiefs history.