Share All sharing options for: Losing the Arrowhead Advantage 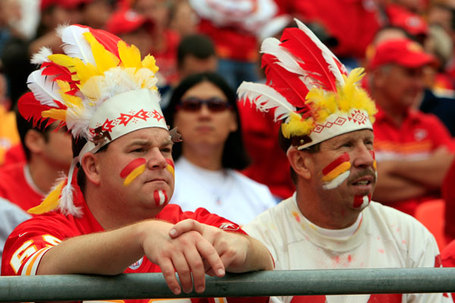 Usually, when the season moves into it's last quarter, descriptions of Kansas City Chiefs home games include a reference to how difficult it's traditionally been to win at Arrowhead Stadium in the cold. Until the Chiefs lost to the Ravens in early December 2006 at Arrowhead Stadium, references to the statistic that the Chiefs hadn't lost at home in December in something like 18 years were commonplace in analysis' leading up to games.

The Chiefs are 3-10 the last two seasons at Arrowhead Stadium. In 2007, the Chiefs were 0-5 in the month of December with two of those losses coming at home.

The strength and legend of Arrowhead Stadium is drawn from the late season packed crowds at the Stadium, who, despite sub-freezing temperatures, forced opponents to deal with the cold and the crowd noise.

Those packed stadiums crowds are also where the loyalty of Chiefs fans is on full display.

It's been sad watching the game day experience being whittled away the last two seasons. I continually reference the Bronco home game I went to last year when the number of fans midway through the third quarter was likely no more than 15,000.

Any talk this weekend of an Arrowhead advantage is a moot point. People will use that line..."Arrowhead is always a tough place to play" and Chiefs fans will know better but likely still appreciate the sentiment. The game book may list 75,000 tickets sold but the empty sections on television are all too obvious.

Arrowhead isn't dying by any means and any suggestion that a winning season won't get people back in those seats is ridiculous. It's just a tough phase to sit through, when one of the most loyal and intense fan bases in the National Football league has been effectively eliminated from the game.

Only winning will bring the Chiefs fan base up to the level it was in the 1990s and the early 2000s. Right now, Arrowhead Stadium deserves no credit for affecting football games. It will probably be a while before it does again.