A Quick Look at the Buffalo Bills

Share All sharing options for: A Quick Look at the Buffalo Bills 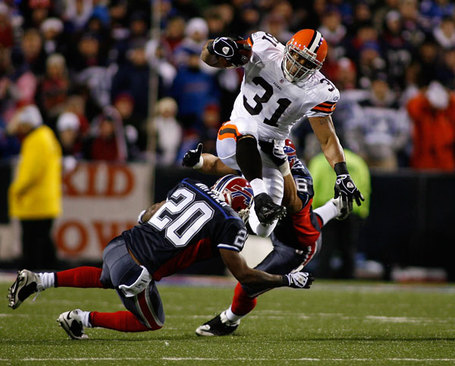 Make sure you check out Buffalo Rumblings for actual Bills analysis.

After starting out the season going 5-1, the Buffalo Bills have lost four straight games. In those four losses, the Bills have, ahem, thirteen turnovers.

Bodes well for the team with the second best turnover ratio, yes?

Eight of those turnovers have been interceptions by the Bills' starting quarterback Trent Edwards. The Bills have also fumbled the ball ten times in that four game stretch, losing five of them to their opponents.

Nothing too surprising here but take a look anyway:

Here a few snippets taken from Buffalo Rumblings which I hope capture the current sentiments of Bills' fans.

No, what Buffalo needs are some difference-makers. Guys to lean on. Buffalo is a star-less team, and it's become painfully apparent over the past month that they need a couple of stars.

Right now, Buffalo is stuck at "average"; they started the season at "very good".

Meanwhile, the Bills were able to find a pass rush tonight - against a pretty good Browns offensive line, no less. No, it's still not consistent, but it was enough to force Brady Quinn into completing just 39 percent of his passes.

Wait, teams are supposed to be looking for a pass rush?