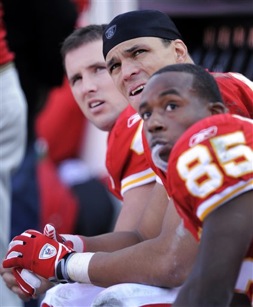 Despite the losses piling up, I've really been digging doing the game recaps on Monday mornings because this year we actually have a narrative to discuss. There are improvements. There are setbacks. The last nine games last year were so terrible to watch and blog about because the team was at a standstill and plain disgusting to watch. This year we're still losing but at least it's interesting.

The decision to punt the ball

You knew this was coming from Herm...

"At that point it’s a one-score game and you still feel like if you can hold them...we had stopped them the series before."

Sitting on the Saint's 40-yard line with ten minutes left in the game, Herm Edwards made the decision to punt the ball away on 4th and 2 to a team that had scored on five of the previous six drives. For some reason, Herm zeroed in on the Chiefs' stop on the previous drive and completely ignored the evidence from the rest of the game.

As soon as Dustin Colquitt kicked that ball down to the 12-yard line, you knew it was a mistake. A sinking feeling began to develop in my stomach. I knew the Saints were going to score. The odds certainly tell you to punt the ball when you're on the 40-yard line with ten minutes left and you're down a touchdown.

You also have to look at the odds of the #1 offense driving against the NFL's worst defense. I wasn't surprised when the Saints drove down the field and kicked that field goal to go up by two scores. They had been doing it all day long.

Only one word describes this decision: gutless.

I've racked my brain quite a bit on this issue of scoring points in the third quarter and the only conclusion I can come to is that our opponent's coaches are making better half time adjustments than our coaches. Nothing else really explains the lack of production.

If the Chiefs are able to convert their stalled field goal drives into touchdowns, they probably win the game.

It's already becoming clear that most fans disagree with the play calling down there and I have to agree. The Chiefs needed to tighten up the line and power their way into the end zone, as opposed to keeping the offense in the Wildcat/Pistol formation.

Chalk this one up to a Chan Gailey learning experience. Why he didn't call different plays with his experience...I don't know.

I'm going to quote DJ's post from last night because it says exactly what I want to: "And most of all, when you are in 1st and Goal at the one yard line, you DAMN WELL better be able to get in the end zone in three tries by running it without having to resort to low percentage fade passes that don't work 50% of the time." 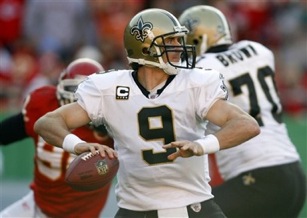 Obligatory "We have no pass rush" mention

The Chiefs' six sacks on the season is the lowest total of any team at this point in the season since 1982. You know, the year they started tracking sacks.

Interesting side note: "Quarterback sack" was first coined by hall of fame defensive end Deacon Jones.He felt that a sack devastated the offense in the same way that a city was devastated when it was sacked."

Spreading the ball around

To be fair to Croyle, the Chiefs do have a much improved receiving corps over last year (Remember Bobby Sippio?) and now that I think about, I didn't want Croyle passing to any of those guys anyway.

The bad kind of special

I'm willing to be patient with our special teams problems because of all of the Chiefs' injuries this year. Coverage teams are filled with backups, rookies and any other smattering of players the team has to put on the field. It has to be tough to get any sort of consistency out of a group that is anything but consistent in its personnel.

What this game really did a good job of was highlighting the Kansas City Chiefs major problem areas. Issues with game management, running the football, special teams play and our pass rush were all on display yesterday.

Here are some links to get you going this morning.