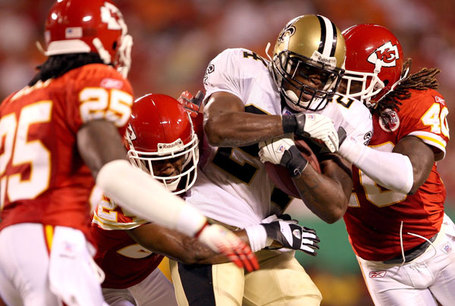 Hey everyone, I've barely taken a look at what's going on with the AP Draft Guide but I will later today. Perhaps we can figure out a front page game plan for it. Thanks.

Miss Arrowhead Pride will become Mrs. Arrowhead Pride sometime next year and I'm already discovering how insane this wedding stuff can be. In fact, if you take Dwight Eisenhower's farewell speech, and replace "military" with "wedding", it reads just the same!

"Now this conjunction of an immense wedding establishment and a large wedding industry is new in the American experience. The total influence -- economic, political, even spiritual -- is felt in every city, every Statehouse, every office of the Federal government. We recognize the imperative need for this development. Yet, we must not fail to comprehend its grave implications. Our toil, resources, and livelihood are all involved. So is the very structure of our society."

Enjoy your Friday everyone.