Chiefs Actually Remove a Defensive Player from the Injury Report

Share All sharing options for: Chiefs Actually Remove a Defensive Player from the Injury Report 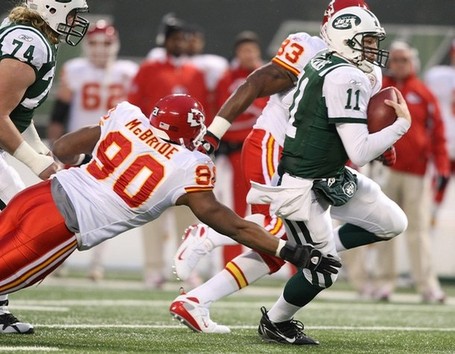 From IR candidate to possibly playing this weekend - Turk McBride.

If their latest injury report can be believed, the Chiefs will have one of their starting defensive ends available for Sunday’s game against New Orleans at Arrowhead Stadium. The Chiefs removed Turk McBride, who has a sore shoulder and didn’t play last week in San Diego, from their injury list.

Of course, the information might not be airtight. Last Thursday, the Chiefs removed cornerback Brandon Flowers from their injury report only to list him again on Friday. He didn’t play against the Chargers.

If McBride does indeed play, it will make a big difference. Instead of McBride, the Kansas City Chiefs likely would have had to start a player who wasn't even on the team two weeks ago. Plus, Turk McBride is quietly having a solid year IMO, especially from the stand point of player development.