A Quick Look at the Saints' Defense

Share All sharing options for: A Quick Look at the Saints' Defense 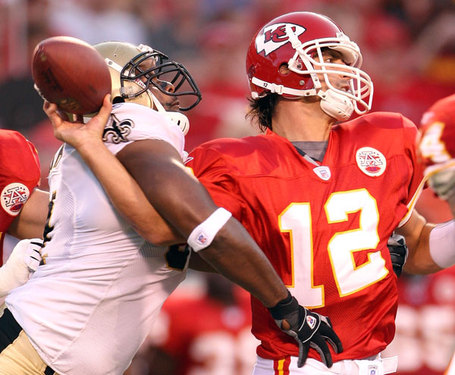 The Saints are middle of the road in their run defense, coming into this weekend ranked 19th overall against the run. Regardless of that ranking, the only back to go over 100 yards against the Saints was LaDainian Tomlinson of San Diego, who rushed for 105 yards back in Week 8. The Saints have held the excellent running backs Adrian Peterson (32 yards rushing) and Michael Turner (96 yards rushing) well below their season averages.

I don't expect the Chiefs to do much to test the Saints' rush defense. The spread offense is working too well right now and the Saints pass defense is too poor to not aggressively attack it.

Here's where things get interesting. Spread offense with Tyler Thigpen at the helm? Check. 27th ranked pass defense of the Saints? Check. Tons of injuries in the Saints' secondary this year? Check.

On paper, this match up has the makings of a highly passing oriented football game. Last weekend against the Falcons, Saints CB Mike McKenzie and backup CB Aaron Glenn both went down with injuries, with McKenzie out for the season. The Saints are in a similar situation as the Chiefs' defense. Both are banged up and signing waiver wire players left and right. The Saints added two corner backs this week alone to their roster.

As far as a pass rush, the Saints haven't fared much better than the Chiefs. The Saints have 14 sacks on the year, putting them well below the league average. The Chiefs have a pitiful 6 sacks this season, which has depressed me enough after reading it again to make me end this post.

Any match ups you like this weekend for the Chiefs' offense?