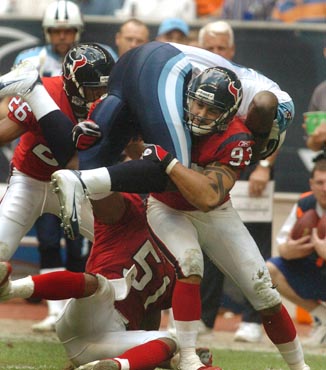 In addition to LB Kyle Shotwell, it appears that the Kansas City Chiefs are also replenishing their supply of defensive linemen with the signing of DE Jason Babin.

News 3 has learned that former Western Michigan All-American Jason Babin will sign a one-year contract with the Kansas City Chiefs today. The Paw Paw native was released by the Seattle Seahawks September 17th, just over a year after being acquired in a trade with the Houston Texans.

A number of teams showed interest in Babin, including the 9-0 Tennessee Titans, but ultimately the Kansas City deal gives him an opportunity to play right away and hopefully secure a long term deal for 2009. The former first round draft pick registered a career high five sacks in 2006, but never saw significant playing time with Seattle and was deemed expendable.

Like Shotwell, Babin has a chance to get on the active roster for the rest of the season because of injuries at the defensive end position. DE Brian Johnston will be on injured reserve and DE Tamba Hali is having a knee issue.