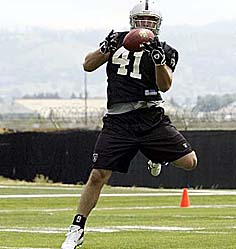 Note: This isn't official but I'm pretty sure it is. We'll hold off on calling this official until we get another source.

With Turk McBride and Brian Johnston headed for the injured reserve list freeing up rosters spots and with the Kansas City Chiefs recent linebacker injury woes, the team is predictably adding linebackers.

The Chiefs have apparently added Kyle Shotwell to the roster. From a local Santa Barbara web site:

Former DP star Kyle Shotwell, fresh off of a stint with the Tampa Bay Buccaneers, stopped by the luncheon. He was signed by the Kansas City Chiefs later on in the afternoon.

DP stands for Dos Pueblos High School and the article was referencing a luncheon that Shotwell was an attendee at. The most official source of information? No, but it's been my experience that this type of stuff is true. Plus, this is the type of digging that keeps you on top of the game. I suppose it's possible the web site confused a visit with a signing so we'll see.

Shotwell played ball at Cal Poly and was picked up as an undrafted free agent by the Raiders in 2007. Since then, he's had stints with the Philadelphia Eagles, Indianapolis Colts and Tampa Bay Buccaneers.

If you recall on Sunday, both Donnie Edwards and Pat Thomas were injured at one point making the addition of any linebacker a must.