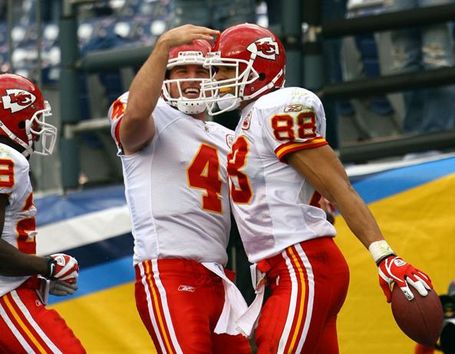 What can I say? I'm a sucker for alliteration...

Confidence returns to the quarterback position

I can't remember the last time the Chiefs got the ball late in the game down in the score and I felt pretty good about our chances to drive 60 yards for a score. I watched Tyler Thigpen yesterday and felt a confidence I hadn't felt in a Chiefs quarterback in a long time. Even though the Chiefs didn't convert the 2-point conversion to win the game (which they wouldn't have had to if we hadn't missed a PAT earlier), they came closer to their second win than the last two weeks.

Tyler Thipgen passed for 266 yards and three touchdowns. He completed 27 of 41 passes and ended the game with a 108 QB rating. Compared to his first three appearances, it's almost as if Thigpen and the Chiefs pulled a Rope-a-Dope on the rest of the league with this guy. I can't really explain his improvement any other way.

The injury bug got into the team's water

The Chiefs have achieved their recent "success" over the last three games despite sending guys off the field each and every game due to injury. Yesterday, RB Jamaal Charles tweaked an ankle sprain he suffered against the Bucs. Linebackers Donnie Edwards (who returned) and Pat Thomas both went down for a period of time. DE Tamba Hali suffered a knee injury. And even backup DE Brian Johnston went down with an injury.

Raise your hand if you ever predicted that the Chiefs depth chart would read Tyler Thigpen/Quinn Gray at QB and Dantrell Savage/Jackie Battle at RB.

Despite the injuries, the team played well and I'll agree with Herm Edwards and say that our injuries, especially to our defense, were a key factor in that late game 2-point conversion attempt. 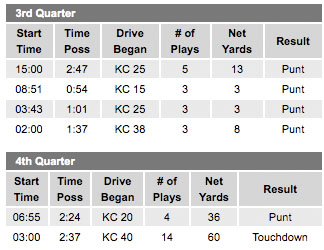 Five straight punts in the second half is going to hurt you and the Chiefs desperately need to find a way to avoid these mini-meltdowns they've had the last few weeks. In the NFL, games turn on a small number of plays and the Chiefs simply have too many long streaks of poor play in their game to call them consistent. Even a field goal during that stretch of five punts wins the game for the Chiefs.

A defensive stand sets up the offense

The Chargers, after kicking a field goal to go up by one, got the ball back from the Chiefs with 4:31 left in the game. Herm Edwards chose to punt knowing he would have to rely on his defense on last team. And for once, they came through.

The Chiefs defense stuffed LaDainian Tomlinson twice for barely a gain and sacked (a sack!) Philip Rivers for a loss of seven yards to ensure a punt by the Chargers. The Chiefs first their first three and out on the Chargers all day long and did at the time when the pressure was the highest.

Turnovers are keeping us in games

One thing to keep in mind as we watch the Chiefs is that we have indeed come close to winning the last three weeks but we're +8 in turnovers during those three weeks.

This team is improving but we're also being greatly helped by our opponents.

The quarterback makes it all better

If the Chiefs were fighting tooth and nail like they have been the last three weeks with a mixture of Thigpen, Huard or Quinn Gray, I doubt there would be as much anxious joy as there is right now in Kansas City. A quarterback playing well starts to ease the pressure on the offense, the head coach and even the defense. Problems that are still there are willing to be looked over a bit to celebrate the performance of the young Tyler Thigpen.

We're living in a bit of a fantasy world right now. We haven't won in three weeks but we're damn excited about it. The run defense showed up for literally one game and we're excited about it. I'm having a blast watching this team but we're far from fixed.

Now, when I talk to people about the Chiefs, it's not "My team may be the worst team in football" (that goes to the Rams now). I mention our quarterback. I mention our young team because with 19 rookies on the team, youth is damn near an excuse to lose.

But most of all, over the last couple of weeks, I mention how much fun it's been to watch this team. At the end of a long Sunday, before I head into the work week, that's all I really want to be able to say. I had fun. My team tried it's best. And the future is looking bright.