Checking out the Chiefs Drive Charts

Share All sharing options for: Checking out the Chiefs Drive Charts 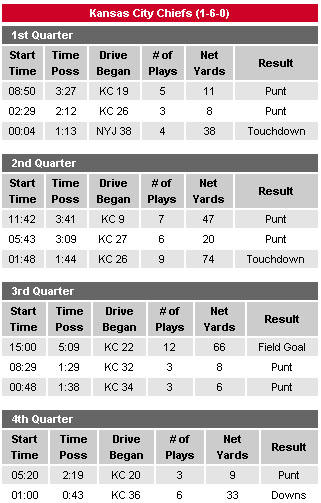 Too busy with work to get much more out of this. Enjoy.

The Chiefs get off to slow starts

Do you know how many points the Chiefs have scored in the first quarter this year? Six. 2007 was almost as scary. The Chiefs ended last year with 26 first quarter points.

I mention this stat because the Chiefs just barely missed more than doubling their first quarter points this season when Tyler Thipgen passed to Tony Gonzalez for a 19 yard TD pass with only two minutes gone by in the second quarter.

After that first touchdown drive, the Chiefs played great offensive football (by our standards) for almost a quarter and a half. Until the middle of the third quarter, the Chiefs only had one 3 and out series. That's a big improvement for our offense.

The offense completely sputtered out after that second Connor Barth field goal in the third quarter. And that is a microcosm of the Chiefs' woes- inconsistency.

The Chiefs have generally been scoring for the most part when they've been afforded good field position by the defense. I'm talking around the 40 yard line and up. What was encouraging about Sunday's drives was that the Chiefs put together scoring drives of 74 and 66 yards. I feel like Bill Murray in What About Bob?...baby steps, baby steps.

Unsurprisingly, the Chiefs are 29th in the league in rushing first downs. They only gained three rushing first downs on Sunday and have been generally terrible at it the entire season. The Chiefs haven't had an effective running game for almost a season and a half.

I had a more elaborate plan to check out the 3rd down and 3 tendencies of Herm Edwards over his entire coaching career but time is cutting that short right now. After the jump, you have a ton of stats corresponding to that 4th quarter call by Herm on 3rd down and 3 yards to go.