Even in a Losing Effort, Chiefs Play One of Their Best Games

Share All sharing options for: Even in a Losing Effort, Chiefs Play One of Their Best Games 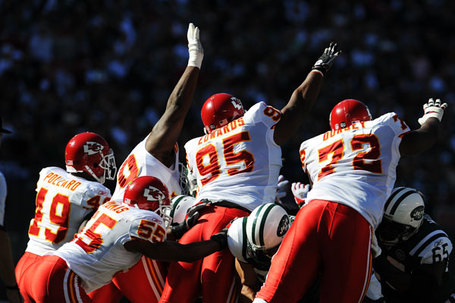 Great game to watch yesterday, wasn't it? I haven't been entertained like that in a long time when watching the Kansas City Chiefs. I'm still waiting to see if patterns or trends of success develop from this game but like DJ said, the Chiefs lost in a good way yesterday. Here's a few things I took away from the game yesterday.

I've read more than a few things already this morning about Herm being responsible for the three straight runs by the Chiefs with 5:00 minutes left, which gave the Jets the ball with 3:01 left.

First, I don't think Herm Edwards has as much influence over play calling as many fans think he does. Chan Gailey is a legit, respected and experienced offensive coordinator. This isn't first timer Mike Solari in there anymore. Do you really think Herm said to Chan Gailey, "Rush the ball three straight times"? I don't believe he did. It's possible, and Gailey said it was all his call after the game, but as you'll see I don't think who called it matters much.

Regardless who made the call to rush the ball three straight times, I'm going to defend it as not as an insane idea as some fans want to make it out to be. Before those three rushes, the Chiefs had 20 offensive plays in the second half (not including kicks) and they had passed the ball on 17 of those plays. I'm guessing part of the logic of those three play calls was doing something unexpected, which is exactly what three rushes was at that point in the game. The Chiefs had only rushed the ball two times in a row twice so far that entire game, making three rushes in a row (hypothetically) one of the few things expected by the Jets' defense.

If the Chiefs gain three yards on that 3rd and three, this conversation is of course moot. I think that a lot of fans, feeling bitter about the loss, needed to find something in this game to bite back on and those fateful three plays by the Chiefs are it.

You can make the argument that Tyler Thigpen could have rushed for those three yards (if the pass had broken down) but I suspect people would have been angry at that call as well if it didn't result in a first down. Thigpen could have thrown a short pass too, which he was successful at for most of the game. Still, you don't know if he would have made it. Rushing the ball on 3rd and 3 isn't crazy by my football standards.

Including this game, on the season, the Chiefs have had 34 3rd downs between 3 and 5 yards to go, rushed on 7 of those and passed the other 27. They've converted first downs almost equally as much on the pass v. the run. So, if you want to say Herm has a tendency, the stats say it's to pass the ball on 3rd and short. Here's a bit more to support that.

It's one of those calls in a football game that if you make the right call and you get the first down, of course you made the right call. If you don't get it, then the call is immediately over analyzed and blown up as if the alternative was so clearly superior.

Pretty good run defense but with a fatal flaw

You almost feel bad for the Kansas City Chiefs defensive line after a game like yesterday's. They put on a pretty good show for most of the game but gave up a long run (almost at the end of the first half no less) to Jets RB Leon Washington. If the Chiefs simply hold the Jets for a bit, the first half runs out and we can forget about a gift touchdown that gave away points in a close loss.

I had been wondering what the Chiefs had planned to do with their 3rd round pick out of Tennessee Brad Cottam. He looked big, fast and added four catches in his first significant action of the year.

You'd be hard pressed to find a free-agent acquisition that has done less with more potential to make an impact on a team than Devard Darling. The Chiefs added WR Mark Bradley earlier this month and he's already a better player than Darling.

I won't say much about Tyler Thigpen. I've never seen him throw the ball like he did yesterday- with accuracy and power behind his throws. Very few of his passes made me gasp as they have so many times before this season. He played very well, deserves to be the Chiefs starter for the rest of the 2008 season and may end up being a good backup in the NFL. For those ready to anoint him the QBOTF, ahem, let's see if he can (a) win a game and (b) play that well twice in a row. Crazy, I know.

A decent pass rush helps so much

The Chiefs only registered one sack in the box score but if you watched the game, Brett Favre was pressured for a good portion of the game. This is Brett Favre and interceptions are part of the package but don't let that discount the contributions made by the Chiefs' pass rush.

The Chiefs had scored 23 points in the first half all season long and yesterday they scored 14 in the first half. It's amazing what not playing from behind will do for this team, or any team for that matter.

I'm cheering the Chiefs effort yesterday but I will point out how a team that is +3 in turnovers should almost never lose. The Chiefs played markedly better on offense but with one turnover a pick-six and another leading directly to a Thigpen passing TD, you still have to shake your head a bit that the offense didn't do more.

This was a fun offensive strategy to watch by Chan Gailey. No-huddle offense (which I'm always a fan of), mixing up receivers and a fight in the offense I hadn't seen this year made this fun to watch. The Chiefs went no huddle over a dozen times this game after using it only sparingly earlier in the season.

What I am going to take away more than anything from yesterday was how much fun this game was to watch. I watch football ultimately to be entertained and yesterday was a blast to cheer for the Chiefs.