Share All sharing options for: Daunte Culpepper to Visit Chiefs on Tuesday 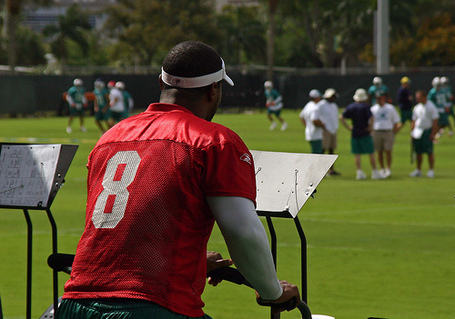 I don't have much news to report on this other than to say that Jay Glazer of FOX Sports said that Daunte Culpepper will visit the Kansas City Chiefs on Tuesday, presumably for a workout/tryout due to the demise of 2/3rds of the Chiefs starting quarterback rotation.

Here is a snippet from the Sporting News Blog mentioning the only NFL player I can name that acts as his own agent:

Jay Glazer reported on Fox's pregame show this morning that Daunte Culpepper, retired for less than two months, will be working out for Kansas City this Tuesday. As someone who watched Culpepper struggle to make an impact in Silver and Black last fall, but also someone who has watched part of four KC games this season, can't we work out a deal to get Daunte to New York for this afternoon's Chiefs-Jets game?

Tyler Thigpen played the game of his life today against the New York Jets and I'm supportive of him playing out the rest of season as the starter. Rumor is that Culpepper wasn't interested in the Chiefs earlier this season because we wouldn't give him the chance to be the full-time starter, only to fill in while Brodie Croyle recuperated.

I'm guessing Daunte Culpepper will only become a Chief after Tuesday if KC's brass says he can at least compete for the full-time starting spot. I personally don't see the Chiefs steering away from Tyler Thigpen, especially because Bones is the only Chiefs' QB who can run this offense at the moment. The precise reason that backups Ingle Martin and Quinn Gray haven't taken the field (aside from Martin's, you know, actual football ability) is because of their unfamiliarity with the offense.

Despite the sun breaking through the clouds for a brief moment this afternoon in New York, the Kansas City Chiefs' 2008 season is a waste. The addition of Culpepper doesn't do much except (theoretically) stop the bleeding for a brief time and this fan can't see the long-term value in that.

H/T woodman212 in the FanPosts.