Share All sharing options for: AP Writers Around Town 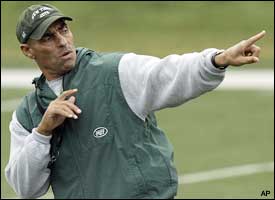 By town, I mean the internet. By "writers", I mean Primetime and I. Here are a few spots we've been featured at this week.

I stopped by the Pigskin podcast and gave the guys there about ten minutes or so of info on what's going with the Chiefs' QB situation, Larry Johnson and our leader Herm Edwards.

A venue has a blog? Who knew? Anyway, I gave the MSG blog a few opinions on what's happening in Chiefsland right now and I'll say I'm already regretting saying that Larry Johnson will likely not be a Chief next year. We're probably stuck with him.

Primetime took this one and in 100 words breaks down this week's game against the Jets.

Finally, Primetime now has his own blog at MVN called The Football Wire. He's the general NFL blogger over there and puts out a ridiculous amount of content in addition to his duties at AP. The Wire is definitely something to check out and I want to congratulate him on his work there and his work here. Definitely top notch all around.

Don't forget about the open thread tomorrow. I'll post it probably around 11 AM or so.