Literally No Experts are Picking the Chiefs to Win

Share All sharing options for: Literally No Experts are Picking the Chiefs to Win 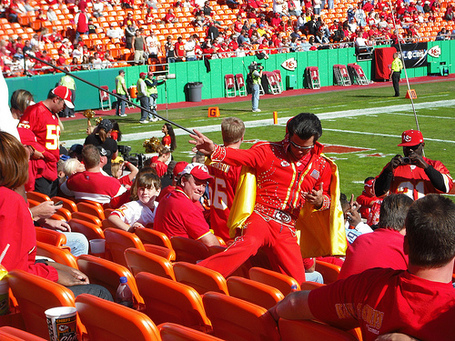 Surprised? Nah, neither am I.

After a physically-taxing 34-10 loss to the Titans, the Chiefs fell to 1-5 and saw their top two quarterbacks, Brodie Croyle and Damon Huard, go down with injuries. Croyle is lost for the season with a knee injury, while Huard's status is uncertain for next week with a thumb injury. That would be plenty to dampen the spirits of your average NFL coach. But not Herman Edwards, whose sunny disposition and amicable personality can always find the positive side to any situation.

As poor as the Jets played last weekend in their OT loss at Oakland, the Chiefs have looked even more pitiful. Without Larry Johnson, they have no go-to stars to look to. Even Brett Favre should be able to put up enough points to win this, even if he throws a couple more picks!

How far off the national radar screen has Herm Edwards fallen? He’s making his second trip back to the Meadowlands on Sunday, and nobody cares.

With the Chiefs down to their third-string quarterback and Larry Johnson being suspended there should be no way this game is even close at halftime. Then again this is the Jets.

Down to their third quarterback, the Chiefs will give Tyler Thigpen his second career start. That's grim. The Jets shouldn't have much of a problem rebounding from their loss at Oakland.

The Jets waited all last week. But Brett Favre never phoned to tell them how to beat the Raiders. New York wins, but give me K.C. and the 13.