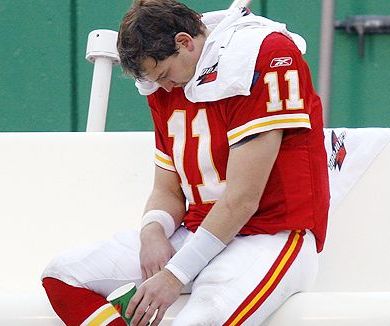 First Brodie Croyle and now Damon Huard is gone for the rest of the 2008 season, supposedly with an injured hand. That leaves the Kansas City Chiefs with Tyler "Bones" Thigpen, just-signed former Jaguar Quinn Gray and Ingle Martin. Thigpen will start, with Martin as the backup and Gray as the #3 QB.

Here's the only link I can find to this online, which is from The Fort Mill Times. I have confirmed this elsewhere though.

Kansas City Chiefs running back Larry Johnson will be deactivated for the second week in a row and quarterbacks Brodie Croyle and Damon Huard were placed on injured reserved on Wednesday.

What a week for the Chiefs. The loss of Huard is minimal and frankly the guy probably is glad to be out for the rest of the season. Huard to IR doesn't change much. The Chiefs are still going to pursue other avenues to find their quarterback of the future because that player is not currently on the roster.

NFL.com is also reporting that Larry Johnson will not play this Sunday. Anyone else ready to move on? He's become Terrell Owens without the production.

H/T to Eric in the FanPosts.