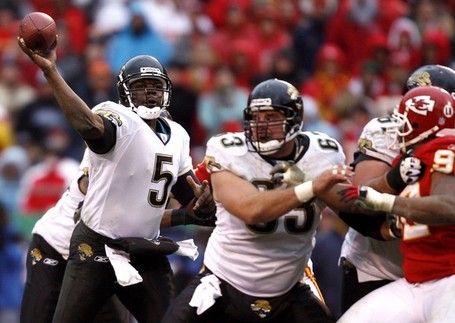 Our options are incredibly limited at this point but Quinn Gray figures to see some playing time at some point in 2008.  He most recently saw action with the Jacksonville Jaguars last season actually winning 2 of his 4 starts.

Chiefs fans will remember him for his near comeback against us in the last week of the 2006 season in which he led the Jags back from an 18 point deficit only to fall by 5 points (and then we made the playoffs!).

The Houston Texans signed him to a 1 year deal in March but subsequently released him in June.  Then, with Peyton Manning shelved with a knee injury, the Colts picked him up to compete with Jared Lorenzen for a back up spot.

Some of his highlights include:

What do these numbers mean?  Well, it means he has shown the ability to have big games in the NFL, something which Brodie Croyle never showed us.  He's never been given an opportunity to lead a team for longer than his 4 week stint in Jacksonville but it's still better than what we've got.

As of now, I consider Gray an upgrade over Croyle.  His ability to stay healthy (6'3", 246 lbs helps) and his mobility are an immediate upgrade for our other options.  Chan Gailey has demonstrated some success with mobile quarterbacks in the past.

Gray's career highlights aren't overly impressive but remember he's more of an unknown commodity at this point.  We know Croyle gets injured.  We know Damon Huard lives only on the 10 yards and less patterns.  We don't know what Quinn Gray can offer us.  Yet.